Disclaimer: This review is from a retail copy of the game that was provided by Floodgate Games to Open Seat Gaming, but opinions are our own based on several plays of the game.

Description: 3 Laws of Robotics is a social deduction game with a twist: rather than trying to deduce what hidden roles everyone else is, you can see everyone’s card except yours and you have to deduce, from what you can see, what your rank and suit might be. However, not all the cards are dealt to players, so some cards will be hidden for the whole round.

The game is played over 4 rounds, with each round following the same steps:

Victory point cards are worth between 1 and 3 points, and after 4 rounds the player with the most points from all their cards is the winner!

Review:  The theme of this little game is absolutely delightful. If you know anything about science fiction, then you know where they got the name from. In short, Isaac Asimov wrote a short story called “Runaround” where the three laws were first listed. This Wikipedia article breaks it down pretty well. These laws aren’t in the game, obviously, but it’s good to know where things come from. 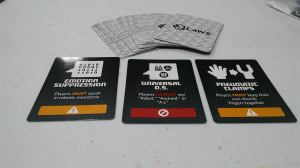 One of the coolest parts of the game is the addition of “laws” in subsequent rounds. These laws can be anything from holding your hands like robot claws to not being allowed to use any pronouns when you ask a question. Then, if you break a law and someone catches you doing so, they get an enforcement token – which, with some laws, just end up getting tossed all around the table multiple times before the round ends.

The art is adorable. Even though it’s simple (just numbers and pictures of robots, androids, and AI), it’s both colorful and cute. It’s really simple to see everyone’s rank and what team that they are on. I do wish the words on the cards were a little bit bigger, but that’s a minor quibble.

There are some people that are bad at “social deduction” games (Werewolf, etc) because they can’t lie. This is a deduction game that is social, so the playing field is a little more even. The fact that you typically don’t need to lie makes it a good deduction game for individuals who may not be quite as good at lying as everyone else. There are some advanced Laws that force you to lie to certain factions (they’re even in their own envelope with a warning!), but you can keep those out if you want to avoid lying altogether.

One thing that we discovered when playing with a group that’s less familiar with gaming is that the game’s concept was a little abstract for them. We actually played an entire 4-round game without ever putting the Laws in there, because it took a bit for them to get used to it. So, while non-gamers can definitely get the drift of the game, it’s definitely easier for people who are more familiar with gaming.

If you have people at the table that are a little self-conscious or that may struggle with the “being silly” part, it may not be a good fit for your playgroup. There’s definitely a bit of a social contract that comes into play when you bring this game out, and if you aren’t prepared to break loose and get goofy with it, you may not enjoy it.

Overall, 3 Laws of Robotics is an absolutely fun little game that brings out joy and laughter every time that it hits the table. It’s a fun deduction game that is social, without really being typical “social deduction” like Coup or Deception: Murder in Hong Kong. 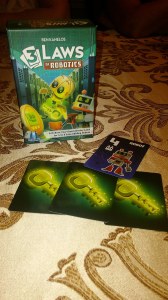 Try, Buy, Deny: Do you like family-weight deduction games? Do you enjoy hidden information like what you get in Hanabi and Pikoko? Then 3 Laws is definitely a buy for you! If you’re not the biggest deduction fan or you don’t often play with more than 4 people, then it’s a try. Find some friends at a convention or game day and give it a whirl!