If you follow Sarah and I on Twitter, you likely know how involved we are at our church, and how we often game with many of our church friends. One of the families that we game with the most has a larger family, with three boys. The youngest received Monopoly Gamer as a Christmas gift – and he asked if we could try it out and write about it on our blog! So, of course, we obliged! 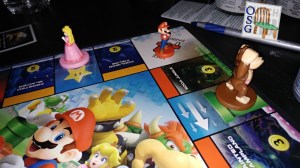 Game Description: Monopoly Gamer is not your grandpa’s Monopoly. In this game, you are Nintendo characters (the base comes with Mario, Yoshi, Princess Peach, and Donkey Kong) making your way around the board and visiting various locations throughout the Mushroom Kingdom. As you go around the board, you will collect coins, buy properties, and roll power-ups that cause calamity on your opponents.

As each person passes Go, they will trigger a boss fight, where you fight one of the Koopa Kids on your way to fighting the last boss – Bowser. Every property you buy and every boss you defeat has a point value – whoever has the most points at the end wins the game!

Roll well, use your Special Star abilities wisely, gather all of the coins and become the most awesome denizen of the Mushroom Kingdom!

It’s imbalanced as all get out, especially with the two player variant (where you have to play as two characters). Sarah played with Yoshi and Princess Peach in one game, and this picture was the result – she kicked my butt (I was Mario and Donkey Kong).

Playing at max count (according to the game is 4 but, with the extra Power-Up Packs characters, I think you could play 5 without any issues) is probably the best way to play, and while it’s still imbalanced, it’s the most balanced it will get.

And honestly, the imbalance doesn’t matter. It’s so ridiculous and goofy (we laughed through our whole two player game), you won’t even notice.

In short – this is a version of Monopoly that Sarah and I will actually take the time to go ahead and play. We had a lot of fun with it and we’d totally say yes if anyone asked us to play.

Try, Buy, Deny: As crazy and unbalanced as this game is, you cannot deny that it’s a heck of a lot of fun. The fact of the matter is, this game is a try. Yes, even if you don’t like Monopoly – it doesn’t feel like Monopoly, I promise.

If you’re someone that really likes the Mario and/or Donkey Kong franchise, and you enjoy the collectibility of this game, it may even be a buy. Yes, I know, I just recommended that you may want to consider trying or buying a Monopoly game.