App of the Month: Bottom of the 9th

Marti and I absolutely love baseball – and no, we don’t like the same teams, but we live in harmony. 🙂 Since today is the day when some MLB pitchers and catchers report to spring training, we here at OSG HQ figured it would be good timing for this App of the Month segment! 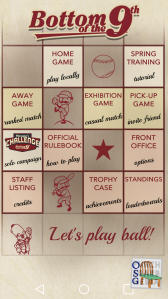 The Game: Bottom of the 9th is a 1 to 2 player game featuring bluffing, dice rolling, press your luck, and variable player powers. The title explains what the scenario of the game is; you are either the visiting (pitching) or home (batting) team in the last half of the final inning of the baseball game. The pitching team wins if they are able to get 3 outs, the batting team wins if they are able to score a run.

First, you pick your pitchers or hitters from the available players; their picture, abilities, and handedness are displayed on baseball cards. Once the lineups are set, it is time to start with the bluffing phase. Each at-bat begins with the hitter guessing which quadrant the pitch will be located in, a combination of either high and low plus inside and away. Then the pitcher picks where they are going throw the ball.

After both players have chosen, you compare where each player said the ball would go and this is where the variable player powers and dice rolling come into the game. Depending on how the guessing panned out, players are able to activate their variable player powers, which typically allow you to re-roll your dice and/or change your die face value one up or one down.

The App: The app is extremely well implemented. Lots of care has been taken to make all the details shine. The overall art and visuals in the app are excellent. The tutorial takes you step by step and teaches you how to play the game from both the pitcher’s and batter’s view.

The menu screen is clearly laid out, showcasing the various ways you can play the game. There are many options: play locally (either pass and play or versus an AI), online (either ranked, casual, or with an invited friend), and solo campaign. You can even play the game horizontally or vertically with your electronic device, which is not standard, but it is a welcome perk.

A fun and cute little addition to the app is the custom old-fashioned song that comes in when you go to the menu. I don’t typically listen to the music on game apps, but I happened to hear this song that talks about why the bottom of the 9th is the exciting part of a baseball game.

My absolute favorite aspect of this board game app implementation is all the detail and consideration put into the movement, styling, and look of the meeples. The way they run, how they swing, the way the ball and bat move, and even how the batter disappointedly shakes their head when they get a strike. Kudos to Handelabra for this amazing production of a board game app.

I do wish there were more players and supports to choose from, but that’s more due to the fact that Marti and I have all of the content for the physical game and I know what’s available. I can’t wait for them to start rolling out expansion content!

The only small quibble I have is that I’ve had trouble getting online games going – but I believe that is only because the app is fairly new, so the number of people playing online is relatively small. Hopefully more people will start checking out the game so I can get more online games in!

Overall this app is outstanding, flat out. If you enjoy any of  the elements of the game, buy it! It is available on Android and iOS for $4.99 USD.

Have you tried the app? Have you enjoyed the physical game? Let me know in the comments or send me a Tweet via @confuzzldmeeple!

Game On!
Sarah – The Confuzzld Meeple