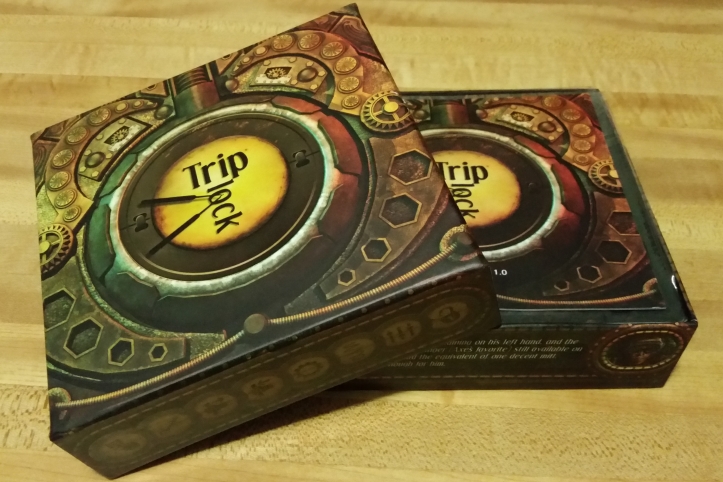 Welcome to another unboxing! This time we have a small but packed game called Triplock from Chip Theory Games! I was so satisfied with Too Many Bones that I just had to back this project, especially since it had so much solo play in it (and even more unlocked via stretch goals!).

Here is everything I received in the August shipping phase. Any additional add-ons besides the base game and Factory solo pack will be shipping in November.

So this is everything that comes in the base game box. I’ll go into details below, as always, but I wanted to point out how pretty the box bottom is. I removed the insert just so I could take the picture! 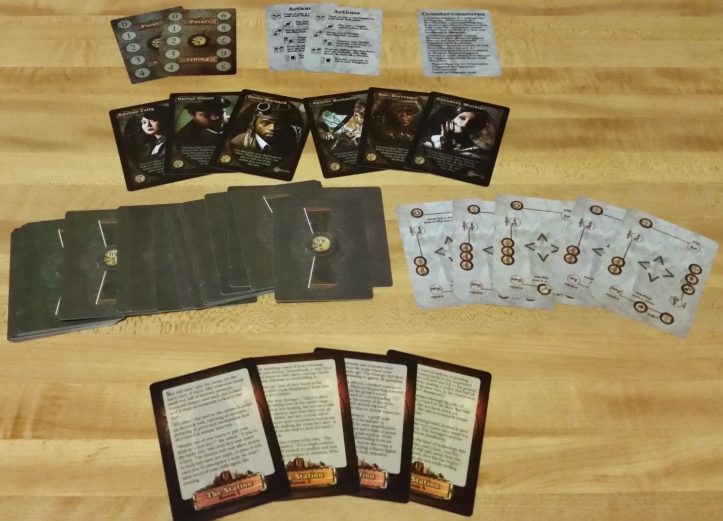 Here’s all the cards. There are score and reference cards for each player as well as character cards with the special abilities of the game’s players. The lock cards are the majority as those are a main aspect of the game. At the bottom you have the room cards for the Station which is Episode 1 of the solo play campaign. Episode 2, the Factory (seen below), came with the base game while Episodes 3 and 4 will be coming with the November shipment (as will the deluxe playmat if you ordered that).

These are the chips. As with all Chip Theory Games products with chips, these are weighty and feel great. They are double sided and, with the lock cards, are the other main mechanic of the game.

The various other bits. Each player has their own custom die and scoring bead, and the regular die is for solo play.

This is the playmat, it comes rolled up in a plastic tube. I legitimately couldn’t get it back into the tube afterwards, haha, so I had to throw the tube away, but it still fits in the slot in the insert just fine even without the tube. Plus, being a bit looser will help reduce the curling you can see in the image above from future storage.

This is the Factory, Episode 2 of the solo campaign. It was an optional add-on but it’s solo so of course I got it! (guess what, I got Episodes 3 and 4, too, but I don’t get those until November, it’s gonna be a long 2 months……)

Each solo episode also comes with a custom character (which, I found out, is because each new Episode requires an additional character). You can see the large Factory card and the small room cards, as well as the large and small character cards, above.

The cards (small and large) have the same texture and quality as the cards from Too Many Bones, and the chips are just as weighty and well-made as well. I haven’t had a chance to read the rulebook and play this yet but I’m very much looking forward to it, especially with more solo play on the horizon!