Disclaimer: This review is from a review copy of the game that was provided by AEG to Open Seat Gaming, but opinions are our own based on several plays of the game. 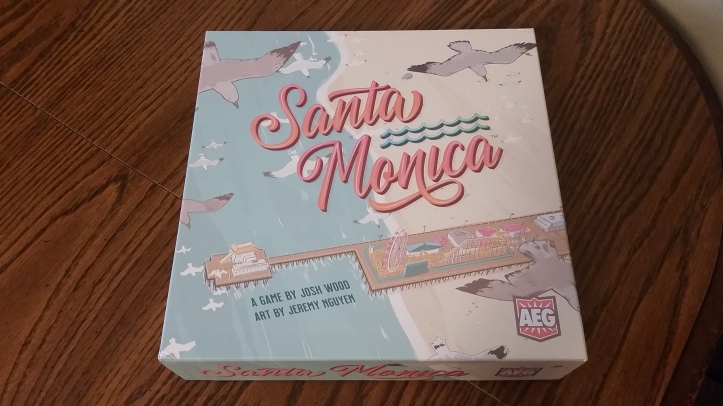 Description: Santa Monica sees players building appealing boardwalks by adding features to their beach and street. People will be attracted and moved around to activities, and the most exciting boardwalk will earn the accolade of being the best oceanfront in Santa Monica!

The game is setup by shuffling the feature cards and dealing them into 2 rows of 4 cards each, the front row and back row. Randomly select 2 sand dollar tokens that will be active for the game, and give each player a random starting feature tile and a reference card. 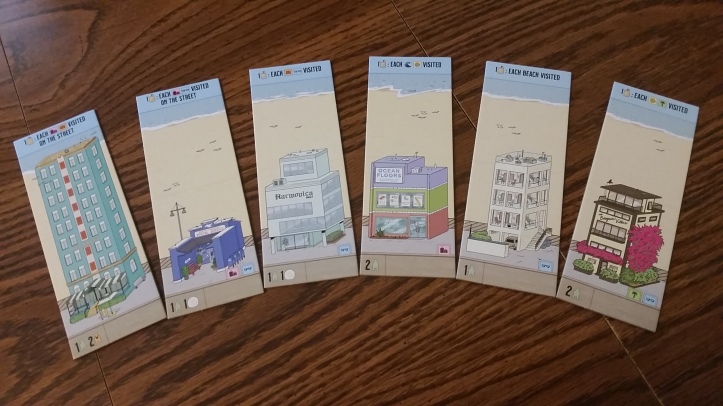 Starting feature tiles are double tall and take up an entire column (i.e.: both a street and beach slot) at once. Players receive the placement bonuses on their starting tile, which always includes at least 1 VIP and might include other people or sand dollars as well. The starting tiles also display in what ways the VIP(s) they receive will score (i.e.: which types of locations the VIP wants to visit).

The game is played over a series of rounds in which players take turns selecting feature cards from the available display, placing them in their boardwalk, and carrying out any placement bonuses or other bonuses they earn.

There are 2 ways to take feature cards from the display:

Placing your selected feature card(s) will usually trigger placement bonuses from that card, such as adding new people to your boardwalk, accruing sand dollars, or giving you movement points which allows you to move people on your feature cards to different locations. Feature cards can also have end game scoring goals so placement is key to meet as many of those as possible.

Once a player reaches 14 total feature cards in their boardwalk (not counting the starting feature tile), the round is finished and then final scoring takes place. Players score for each feature their VIP(s) visited that matches the VIP’s preferred location types, end game bonuses on feature cards, and activity rings on feature cards that have the correct number and type of people on them (such as 3 tourists or 2 locals). There is also a scoring objective tile that will give players bonus points for 2 other categories (that differ depending on which objective tile was chosen) but also negative points for people not inside activity rings at the end of the game. The player with the most points wins! 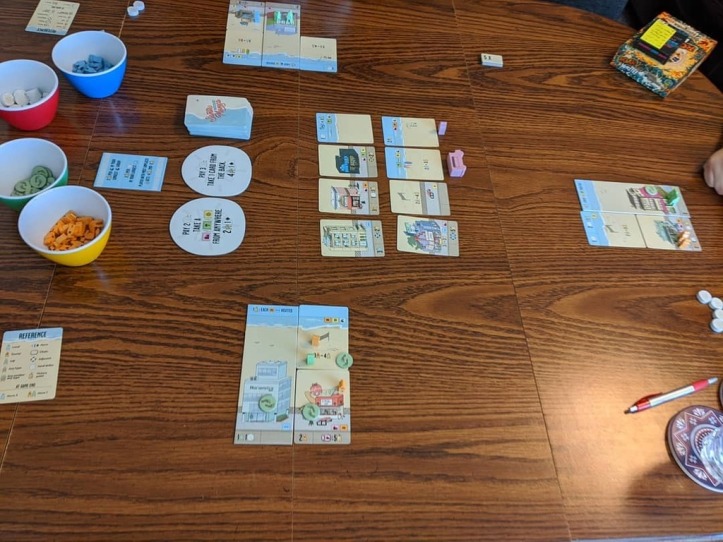 Review: Santa Monica is a tableau builder with a twist. You’re building up your tableau, but instead of being engine building (like Splendor) it’s more end game building. You’re accruing end game scoring opportunities but also using one-time placement bonuses to manipulate the locations of people on your cards to get them where they need to be for those end game bonuses. And that results in a lot of depth that makes this game very enjoyable. Do I place this beach card so that it extends my chain of waves for a bigger score there, or do I place it near a spot where I have several locals so they can more easily get onto the surfing activity ring on the card and score points that way?

The clever front row/back row setup of the feature card market also adds another layer to the decision making. Do I take a card from the front row of a different column and hope that the card in the back row that I want has moved up via someone else taking the card in front of it, or do I take the card in front of it and hope it’s still there on my next turn? The foodie and food truck moving between columns is another consideration as well, as the bonuses they provide can make taking a slightly worse card more desirable than another card because it gives you more options, or could be that last point of movement you need to get a person onto the activity ring waiting for them. 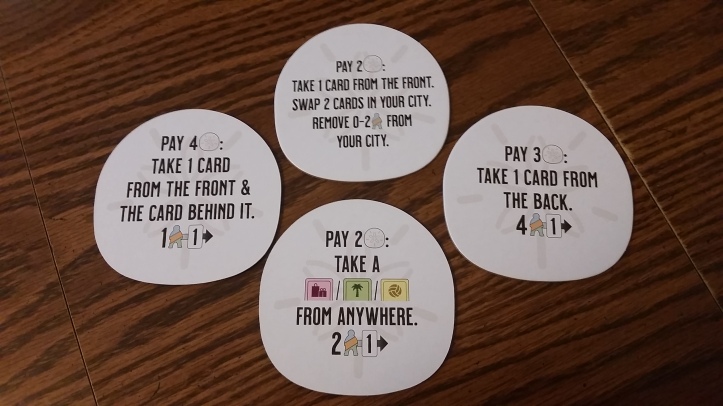 The sand dollar tiles are an interesting modular change to the game. Offering different options for your turn at varying costs, and frequently combining taking a feature card with another action (such as gaining movement points for your people), they make acquiring sand dollars to be able to use them almost a necessity. They are almost always more efficient than taking a regular turn (an exception being if the foodie and food truck are both below a card you take on a normal turn, as you double up those bonuses) and can create interesting combos, or allow you to get that card you really want from the back row of the market without having to wait for it to move to the front.

The art in the game is pretty neat. It’s got a bright and vibrant feel to it, which is perfect for the beach theme, and you can tell they had fun coming up with names for the shops and businesses along the street. The iconography, once you learn what everything represents, is straightforward and easy to tell apart, which helps given the high amount of information you are presented with during the game. My only gripe is that I would have preferred the meeples had their printing (sunglasses or a camera) on both sides of instead of just one, but that’s a minor complaint.

Santa Monica is a great game that seems simple on the surface but is deceptively thinky and makes for a fun and interesting experience every time you play.

Try, Buy, Deny: If you like tableau builders and/or beach-themed games, or if you’re looking for an easy entry game that has a lot of depth to it, then Santa Monica is definitely a buy for you. I highly recommend this game.