Exit: The Game – Theft on the Mississippi

Disclaimer: This review is from a copy of the game that was provided by KOSMOS to Open Seat Gaming, but opinions are our own based on several plays of the game. 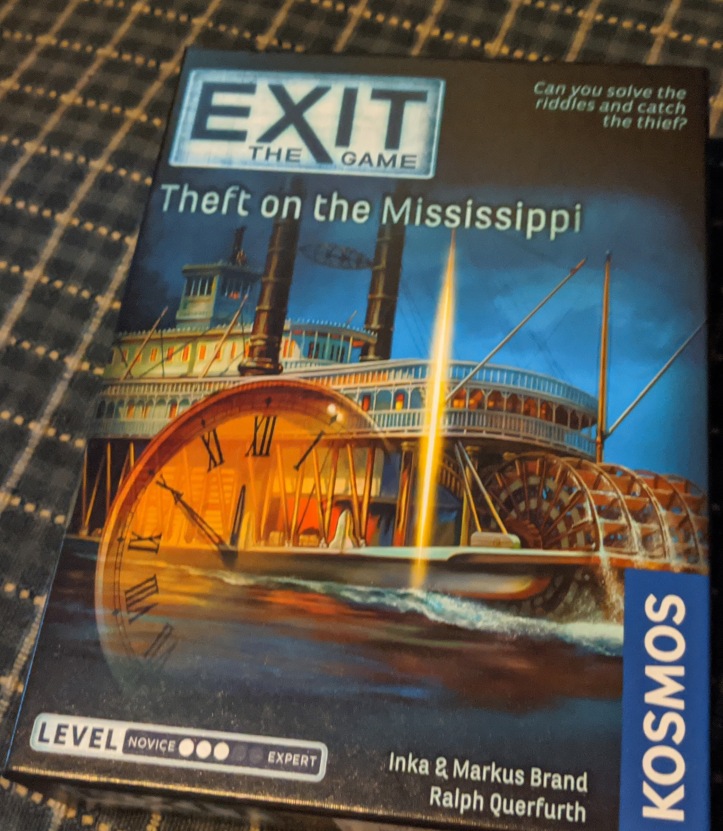 Description: Exit: The Game is a series of exploration-based storytelling games that all utilize a basic framework of mechanics and components. There is always a decoding disk, booklet, and 3 types of cards: Riddle cards, Answer cards, and Help cards. There is also a short manual that gives the basic rules of the game and how to begin the story.

Players begin each game by reading the manual which gives them information on how the system works and also an introductory bit of story to set things up. Players are then given free reign to start trying to solve the various puzzles and riddles that will hopefully lead them to a resolution for their current predicament.

Riddle cards are taken from the deck when specifically told to, such as via an image in the booklet or if another card tells them to take a certain one. They have information on the back that is then used to make further progress in the game. Riddle cards are the most essential cards, so trying to get more is always a good idea.

Answer cards are used when players think they’ve found the answer to a puzzle via the decoding disk, which has several rings and by lining up symbols on the rings you will be given a number. That number is the Answer card you should check to see if your solution is correct, which will usually reward you with information and often Riddle cards, or if it is incorrect and you need to try again.

Help cards are split into small sets based on the symbols of various puzzles you’ll encounter throughout the game. If you are stuck on a puzzle, there are usually 2 Hint cards and a Solution card available. The Hint cards will give you helpful information but won’t outright solve the puzzle for you, whereas the Solution card gives you the answer outright.

Players continue investigating, solving riddles, and accruing information until a card tells them they have won the game. At that point, players record their time (if they used a timer) and other information, and receive a score based on where their recorded information coincides on a table in the manual. 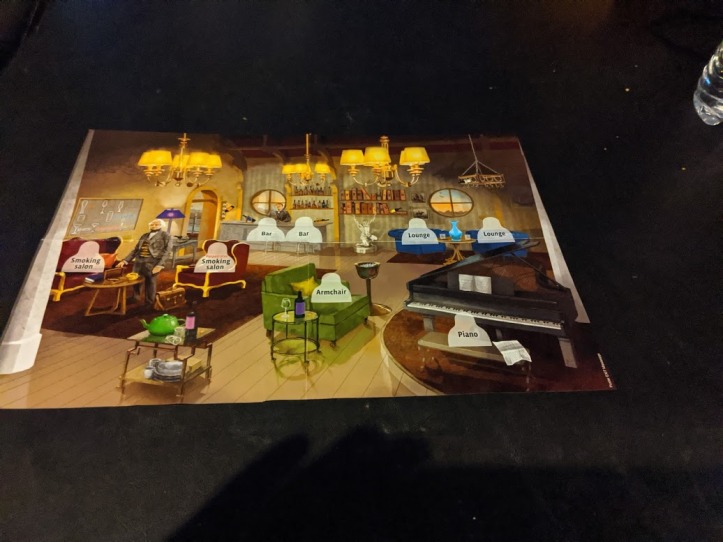 Review: EXIT games have always been really interesting to us. It’s funny that I’m putting together this review on the 3 year anniversary of when we played our first one. Why do I remember that? Because it was the Abandoned Cabin, in an old cabin formerly owned by friends of ours, on the day Sarah asked me to marry her.

So, yes, EXIT games have a very soft spot in my heart.

I love the system behind the EXIT games – they all use a cipher and piles of hint cards, but the other elements of the game are always different and unique. This one is absolutely no exception – it takes the original premise of them and puts it in a new way.

Granted, we aren’t always fantastic at them. But they still challenge us, and who doesn’t have fun looking at things in the light, cutting them up, and tearing them apart?

The price point is perfect, too. For $15 (or less), you get a game that gives you a couple of hours of fun, and it’s fantastic. Even if you aren’t a huge aficionado of escape rooms, you can still get a lot out of EXIT games as a whole.

We loved the premise. The deduction that you had to do in order to figure out the thief was a ton of fun, and it was cool (and tactile) to move things around like you would if you were in a briefing room in a police department.

But, toward the end of the game, we felt like there was a bit of a jump in logic you needed to take – we had to use a handful of hints to figure out what was going on, and we still aren’t sure we did it 100% correctly.

That being said, it was fun. It was good. It was difficult. And if that’s what you want in an escape room game, this is one you want to check out.

Also, if you don’t mind seeing something ridiculous, here you go. This was something we had to find in the box itself in order to answer a clue. 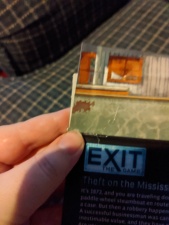 Try, Buy, or Deny: Let me start off with this: you definitely want to be sure that you try out a few of the Exit Games. Some of my favorites are in the first set (the Pharaoh’s Tomb and the Abandoned Cabin), and some others have been hit or miss for us. But, for sure, you want to give an EXIT game a try at some point.

That being said, unless you are really experienced with escape rooms and/or you’re doing this with 3 or 4 people, you may want to start with a different one. This game really required you to think outside of the box, and could be frustrating to newer players.