Disclaimer: This preview is from a digital copy of the game, found at http://frenchtoastgame.com. Thanks to Jellybean Games for providing us the opportunity to check it out! 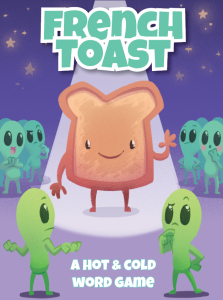 It is not listed on BGG yet, but the team at Jellybean Games including Peter Hayward (developer), Tina Bongorno (cover art), Frankie Clarkson (Art and Graphic Design) helped to bring French Toast to life.

Description: You’re an alien, and you visited Earth for the first time. The first human artifact that you came across was the wonderful thing known as French Toast. Now, every time someone returns from Earth with new knowledge, they ask “Is it like French Toast?

French Toast is a lovely game for 2 to 10 people that follows the idea of “hot and cold” word guessing. It’s fairly simple. The person who knows the word is called “The Toastmaster,” and they have the word on a piece of toast (card). Then, they are provided with a hand of 6 adjectives (there are 36 of them total).

Then, there is a scale on the table, which the players can see, from “is” to “is not”

The Toastmaster will put one of those adjectives underneath what they believe to be their appropriate spot on the scale. So, for example, if the Toastmaster’s word was “Igloo” they could use the word “hot” and put it under “is not.”

It sounds strange, but here’s an example.

The Toastmaster’s Word is “Lightbulb.” They place the adjective “Round” under the space to the right of “is,” since lightbulbs are kind of round, but not completely.

And so on, for 30 seconds. When the 30 seconds is up, the Toastmaster draws a new hand of 6 adjectives, and they add another one to the board. If the word is guessed, then the team wins! If all 6 spaces on the continuum shown above are filled and no one guesses in a final round, then you lose.

There are also team based rules and purely competitive rules, but we haven’t had the opportunity to try those yet.

Review: Our friend Carla from Weird Giraffe Games invited us to give French Toast a try; she had been helping playtest it at various conventions throughout 2019 and she thought it would be right up our alley.

She couldn’t have been more correct. French Toast is fast, fun, and absolutely hilarious. The 30 seconds is just short enough to make you start throwing out the goofiest words, but long enough to make some progress toward what the actual word is.

The art is absolutely adorable and colorful. It’s really simple – there’s nothing flashy about it, and the cartoony look is absolutely perfect for the story and “theme” behind the game. The aliens are cute too – who wouldn’t want to go in that spaceship?

I do want to let you know, if you go to try the online game, be sure that you keep an eye on things. Sometimes it hiccups, but it’s an easy fix – you just have to refresh, start a new room, and then tell everyone the new room code. The online version is just to give it a whirl until the final result can get in our hands, but it’s definitely a solid representation of what the game is and does.

French Toast is a delightfully silly and fun twist to the idea of “hot and cold” guessing games. With cute and colorful decks of cards, it is an approachable game that anyone can bring out on game night.

Jellybean Games is a small independent publisher who has some really solid small box games in their line. They’re really committed to diversity and bringing more people to the table, and French Toast is a perfect addition to their collection. We were first day backers, and I think y’all should get in on it if you want a fun, fast little party game that can go anywhere with you!

Kickstarter Info: French Toast is on Kickstarter now! This little game is only $19 plus shipping (which is $5 in the US). They’re already funded, and working on the stretch goals, so get in on it now if you’re interested! Kickstarter ends on July 17th!