Disclaimer: This preview is from a prototype copy of the game that was provided by Gold Seal Games to Open Seat Gaming, but opinions are our own based on several plays of the game. 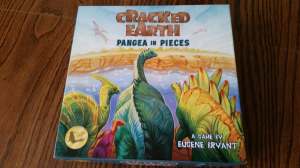 Description: Cracked Earth: Pangea in Pieces sees players placing and manipulating tiles (plates) and dino meeples in an effort to score points when each of 3 meteor strikes occur. Once the final meteor hits, the game is over and the player with the most points wins!

The game takes place over a series of rounds following an initial formation of the starting plate layout. Each player, starting with the first player, places an initial plate such that the land lines up as appropriate with whatever plates it touches, and then places 2 of their dinosaurs onto a land area of that plate. Once each player has placed a tile, the regular round structure begins with the first player and proceeds clockwise.

Each turn, there are 4 actions that can be taken, with 1 being mandatory and the other 3 being optional. The actions can be taken in any order. They are as follows:

After taking actions, the player draws a new tile from the stack and their turn ends. If, at any time, a meteor tile is drawn, the player discards it, draws a new tile, and then the game is briefly interrupted for a scoring phase. Points are awarded for each continent (area of connected landmasses) with the player having the most dinosaurs on that continent receiving the most points, followed by second and third places, with the amount of points awarded based on player count. Then, the game resumes with the next player, unless it was the third meteor drawn, in which case the game is immediately over. 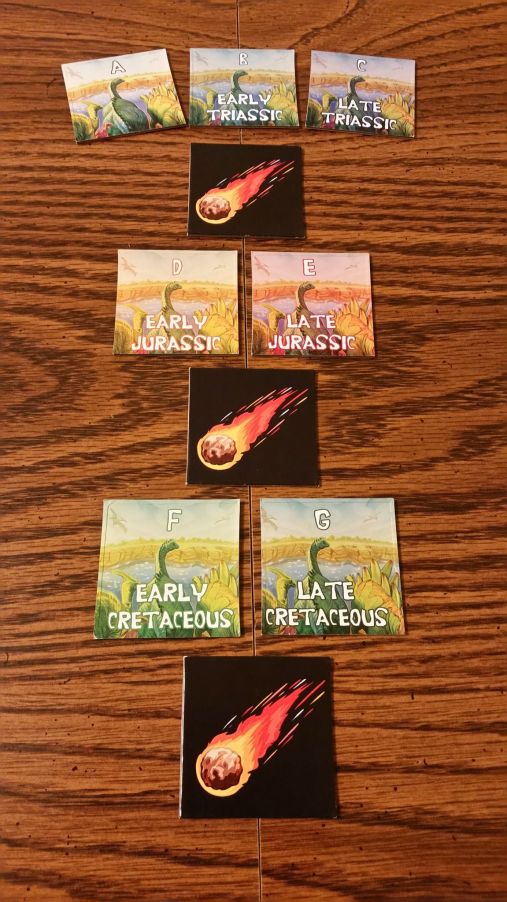 Review: Tile laying games are a favorite around here, and Cracked Earth: Pangea in Pieces (which I’ll just be calling Cracked Earth from here on out) immediately caught our attention. Come on, who wouldn’t want to make dinosaurs, migrate them, and start moving around pieces of land to mess up their opponents?

Now, the pictures that you’re going to see are a prototype, so they’re not going to be the final product. The dinosaurs are adorable and I’m hoping that, for colorblind friendliness, each color is going to be a different type of dinosaur when it comes out. But they’re really tactile.

The art looks really sharp – you can clearly tell where the land begins and the ocean ends. The only change that I think I’d make, and it’s more of a nitpick, is that I’d make the little “lakes” around the land pieces a little bit bigger, so a dino meeple could fit on it better.

Strategically, there’s a lot to consider on your turn. You need to figure out where to make new baby dinosaurs, if you’re going to move them, how far they’re going, and if you’re going to start messing with the land masses that they are already on.

Speaking of which, I also enjoy how thematic that the various actions are for the game. It’s a really cute little simulation of what happened over thousands of years in the early life of earth. Dinosaurs roaming around, land and water shifting, and it all ends with an asteroid!

Another thematic touch was the dinosaurs that sometimes appeared on the tiles to provide special actions or advantages. Since the tiles are separated by period (another lovely addition to the theme), different dinosaurs end up showing up during different parts of the game. They add another level to strategy, sometimes making it even more difficult to work out what you want to do next.

The game was relatively easy to learn, but the rulebook could use some work. There were some rules that were unclear (for example, cards were listed but never mentioned otherwise), but you could still pick it up pretty quickly. I know that the rules we got were an older edition, so it’s likely that the rulebook will be cleaned up and clear when the game is printed.

Overall, Cracked Earth is a great little title from Gold Seal Games. If you like tile laying, but you always wondered “hey, what would happen if I could move tiles mid game?” then this is definitely worth a look. It looks great on the table, it has enough strategy to be enjoyable for experienced gamers, while still being light enough to teach newer gamers.