Here are my favorite games from 5 to 1. My favorite co-operative game has moved up some slots to be in the top 5.

5. Barenpark- I was fortunate enough to get in a demo of Barenpark at Marti and I’s first Origins in 2017, and this game was the first game that I wrote a Review/Preview for as being a contributor to OSG. What isn’t to love about building a bear park? Barenpark is a deceptively smooth experience.  Its also a very intriguing puzzle of how to maximize your space and meet the public goals (that are used in “expert”) variant.   If I have to pick a tile laying tetromino game to play, this is my go to.  I can’t wait to eventually play the Bad News Bears expansion, that adds Monorails!

4. Aeon’s End- What can I say about Aeon’s End that Scott and Marti haven’t already said. Its a great twist on the deckbuilding genre of games and it provides an amazing cooperative gaming experience. I especially enjoy the new campaign mode offered in the New Age expansion. The story that goes along with Aeon’s End Legacy and New Age is great. The Nameless enemies that you go against provide intriguing twists on how you have to defeat them. The fact that you never shuffle your deck and you know whats coming, vaguely at least, when you flip your deck back over is a unique way to build your deck of spells, relics, and gems. The adrenaline rush that players get when you manage to defeat a Nameless just prior to when you would lose is one of my favorite feelings when gaming. The new mages and gameplay mechanics that are added with each expansion is just another reason to love the Aeon’s End series.  Handelabra’s app version of Aeon’s End is well done and a great way to play this fantastic cooperative deckbuilder.

3. Viticulture: Essential Edition- This masterpiece of the worker placement genre was one of my first forays into board gaming that was in the 3.0 weight/complexity range on BGG. Wine making as a theme wouldn’t necessarily be my cup of tea, but the artwork and the way it is all tied together is very pleasing and elegant.  The build up of the game and the decision space involved in every facet of the game is excellent. Some of the juicy decisions you will make: which combination of Mama’s and Papa’s do you pick for yourself, what time are you going to wake up with your rooster,  which type of grape are you going to plant first, which type of visitor is likely to be best for your vineyard, which buildings do you want to construct to make things more efficient, etc. You have plenty of choices to make over the course of the game but not too many so that your brain will completely explode.  Viticulture: Essential Edition is a fine wine that has gotten better with age.

2. Carcassonne- Its the grandaddy of the tile-placement genre of games. It has been Marti’s number one game for a long time and my number two game for as long as we have owned it.  There is something calming and zen-like about building up the French countryside. We now own several large expansions: 1. Inns and Cathedrals, 2. Traders and Builders, 5. Abbey and Mayor, 6. Count, King, and Robber, 8. Bridges, Castles, and Bazaars, 9. Hills and Sheep, and 10. Under the Big Top. We also own the Abbot and the River mini expansions that came with the newest, 2014, edition of the game, as well as the River 2 that now comes included in the 6th expansion, Count, King, and Robber.  For Marti’s birthday, all of us played a mega version of Carcassonne featuring all of these expansions, which while taking longer and requiring more mental energy was still very much a great time collectively building out the countryside. Carcassonne has a charming puzzly essence that lets you create a different countryside every time.  It also has a lovely revamped app version that is very good. 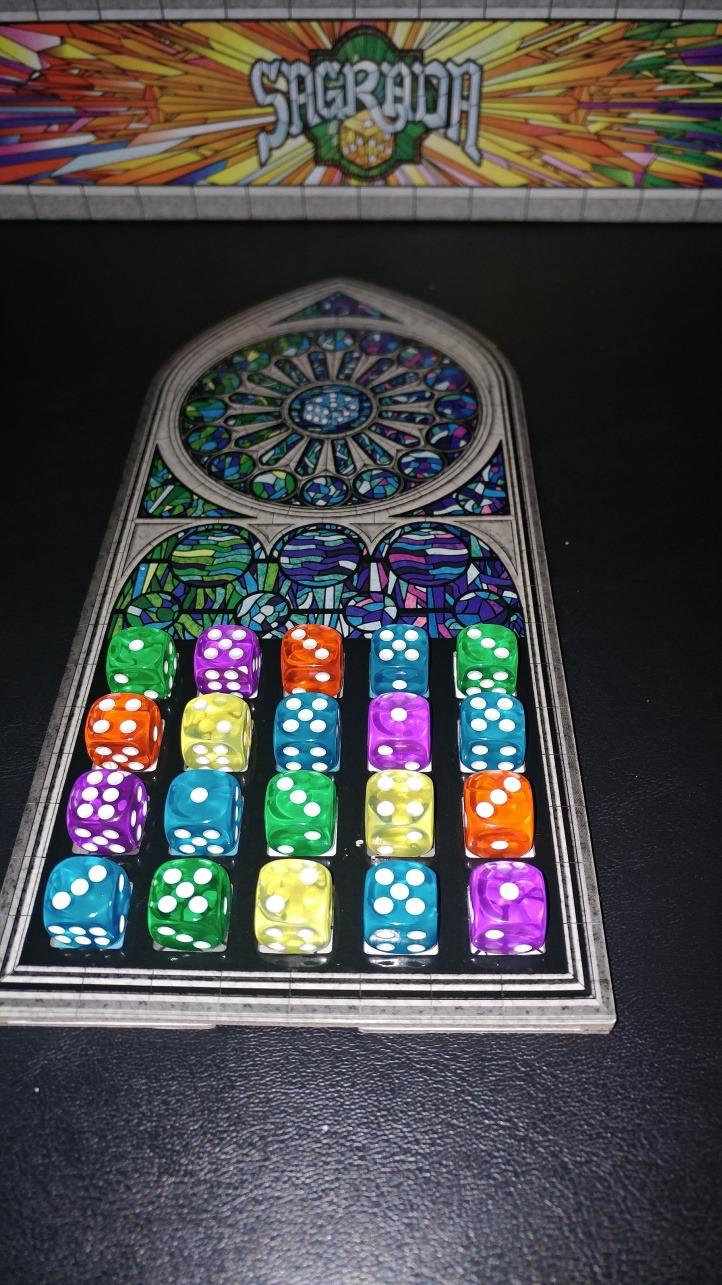 1. Sagrada- I have written about Sagrada many times, put Sagrada in our search bar and see how many times it has come up on our blog. Even after 45+ of plays, it is still my number one game. The game is beautiful, both in terms of gameplay and appearance. The aesthetics of this game appeal to me; its so bright and colorful. The gameplay requires you to try to plan your moves ahead of time, but once you get to draft your dice, you may not be able to execute your plans. Because of that, you may need to become creative with the tools and favor tokens at your disposal. I love the feeling I get when I completely finish a window in Sagrada; even if I lose, there is something fulfilling about being able to complete your window. There is even an app version of Sagrada that came out very recently that is skillfully rendered by DireWolf Digital.

Tomorrow, you’ll get a good look at my aftermath!