Welcome back to my Top 10! Today y’all get to see what games made my Top 5, including the shakeup I mentioned in yesterday’s article. Let’s get right to it!

Dice rolling does not often go in my favor, and with the limited mitigation you can do in this game you’d think it wouldn’t be up my alley. But I continue to really like Hostage Negotiator, even though I lose way more often than I win. For me, the enjoyment doesn’t just come from winning (though it does feel really good when you do, lol). It’s as much about the story and the experience. Seeing what the different abductors do and finding a strategy or combo in the conversation cards that will give you an edge. Having your best laid plans foiled by a terrible dice roll or by a Terror card that hits you right where you didn’t want it to. The ups and downs are all worth it because it’s an enjoyable time. It can take a couple attempts at the same abductor to figure out a strategy, but when it finally clicks and you’re making progress, even if it still takes a couple games to pull out the win, it’s such a good feeling. 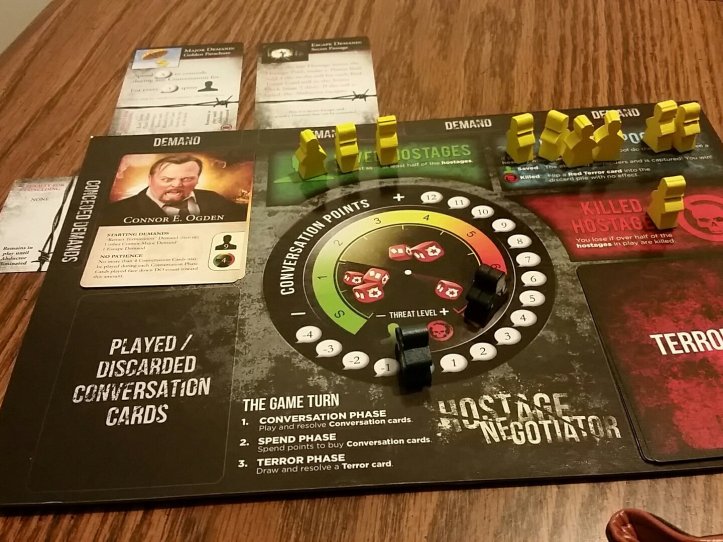 It’s no secret that I am a Marvel fanboy. Love the movies, love games set in the universe, just love superheroes in general. So when FFG announced Marvel Champions as their latest LCG, I instantly knew I was going to love it. After getting this as an early Christmas present from my awesome sister, I’ve played it SO MANY TIMES. I think seven or eight times solo, and twice with other people. It scratches the cooperative LCG itch with a theme I love even more than Arkham Horror (which Champions replaced in my Top 10, though I do still really like AH as well) and Lord of the Rings. The hero/alter-ego flipping is such a fun and unique mechanic, and creates space for really interesting choices during gameplay. Being cooperative, it skews on the harder end difficulty wise, which is just fine because it wouldn’t be as fun if you were just stomping all over the villain. They’ve already released several hero and scenario packs for it, and recently announced the first larger expansion, so there’s plenty of content to keep you busy, even if you play as much as I have, haha.

Legendary no longer my #2, WHAAAAAAAT??? See below for the game that beat it out, but even so Legendary continues to be a staple of my collection and my favorite games. I stated above how much I love Marvel, so I won’t go into that again here. Know that it was an incredibly hard decision on which I liked more: Legendary or Marvel Champions. In the end, Legendary won out because it’s a deck builder, which as I mentioned in yesterday’s article is (and likely will always be) my favorite style of board game. Building up your deck, keeping the city clear of villains, rescuing bystanders, and finally striking at the mastermind are as familiar to me as breathing and eating, yet I keep coming back for more. There’s a ton of content for it, I’ve got most of it and am working through playing it all for the first time. The base mechanics are solid, and expansions introduce new keywords or other mechanics that keep the game feeling fresh, even so many years after it debuted. This game is truly….legendary.

2. Xia: Legends of a Drift System

The game that caused the upset! Xia has been in my collection for awhile, but last year I was finally able to introduce it to Marti and Sarah, we played it several times (both as just the base game and incorporating the expansion), and I just completely fell in love with it. Exploration, missions, fancy ships (with pre-painted minis!), mods, victory points accrued via whatever playstyle you want, random board layout every time, this game has so much going for it. I especially like that you can amass your victory points in a unique way, even if someone else is working on similar things to you. Two people can be going primarily after completing missions, for example, but one of them could be taking outlaw missions to sneak and steal things or destroy ships while the other could be doing cargo hauling and scientific research. Trying new strategies, and new ship upgrade paths, is incredibly fun (even when the strategy doesn’t end up working out that well, lol) and I come away from every game feeling satisfied, and wanting to set it up and go again!

I really don’t have sufficient words to describe how I feel about Aeon’s End. It seems like a fairly straightforward deck builder with the twist that when your deck runs out you don’t shuffle your discard, you just flip it over and now it’s your deck again. But there’s a charm to it that I just can’t help but love. Mages with unique special abilities, a plethora of options for the market, nemeses that range from somewhat difficult to brutally hard, this deceptively simple game has such a depth to it and almost endless replayability. The newest expansion added a campaign mode in the form of expeditions, which is how they’re continuing the story of the world of Aeon’s End after AE: Legacy, but you can also do expeditions just for fun once you’ve done the story ones. The story used to be reserved to being gleaned from bits in the rulebooks and flavor text on the cards, but this new method of storytelling, as you play through a 4 chapter campaign, has raised the greatness of this game so much further up for me that I’m not sure anything will ever be able to topple it from my #1 spot. I love this game, I highly recommend it, and it will always have an honored place in my collection. 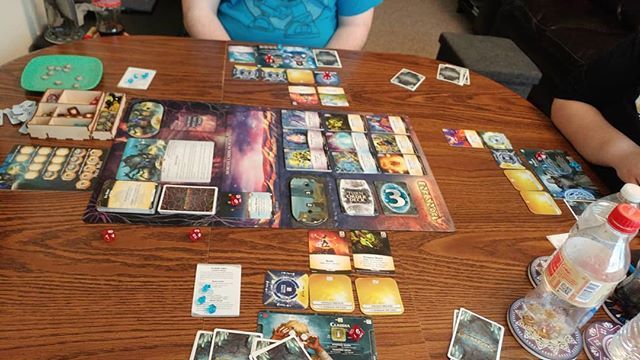 And that’s my Top 10! Even I was surprised at how my rankings fell, especially in some of the things that fell out of the Top 10. Check back tomorrow as I talk a little bit more generally about the aftermath of my rankings!