Disclaimer: This review is from a review copy of the expansion that was provided by Restoration Games to Open Seat Gaming, but opinions are our own based on several plays of the expansion. 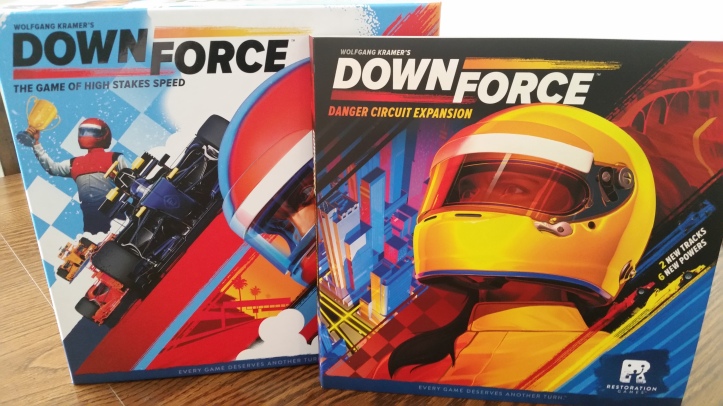 Description: Danger Circuit is an expansion for Downforce that adds a new, double-sided board with a new track on each side, as well as 6 new power cards. The power cards add interesting choices and can be shuffled in with the other power cards and used with any tracks. The new tracks each add something new and we’ll describe them individually here. 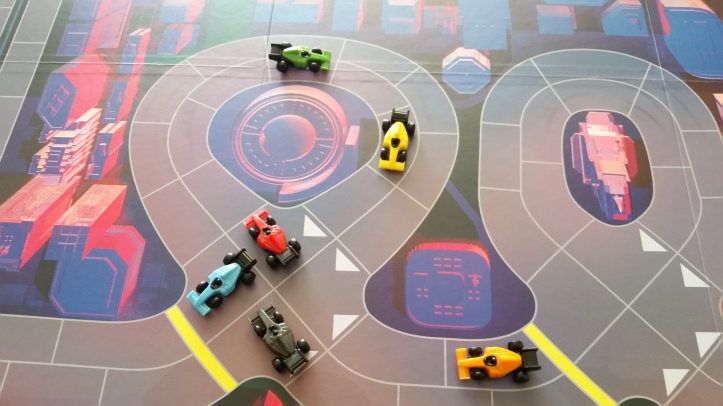 Crosstown Speedway: This city-scape track features 2 new facets of the racetrack. First, it has crossover loops which have spaces that are both the entrance and exit for the loop. Cars can be on those spaces going either direction (and a car going the other direction will block cars same as normal blocking) but you cannot cut across the loop to skip it, the cars have to go straight through the intersections in the normal forward movement pattern. Second, it has split sections where 1 lane is separate from the rest of the track for a brief period, sort of looking like express lanes in real life. Cars on the split lane have to stay in it (and may get stuck behind other cars further ahead in the lane) until it rejoins the rest of the track.

Switchback Pass: This mountainous track features dangerous spaces. These spaces show cracking road with debris and have special rules. They are smaller than normal spaces (too small to fit a car) and can only be used to pass other cars. You can’t end a car’s movement in a dangerous space, and if there are non-dangerous spaces available to move through you must use those instead. You also have to move opponents’ cars through those spaces if it would allow them to pass a car otherwise blocking them.

Review: Danger Circuit is a great addition to the already fun betting and racing game, Downforce, which has been recreated by the talented team at Restoration Games.

The additional tracks add another layer of strategy that you didn’t find in the two tracks from the base game. By adding special spaces and difficult terrain, you have to do a bit more thinking to ensure that you can use your cards in the best way possible. You have to think several steps ahead and make sure that you don’t get yourself stuck in a bad position.

I really enjoy the original tracks from the base game, but these definitely mixed it up for those of us who know the game a little bit more and have played it quite a bit. The extra challenge is definitely a great thing for experienced gamers, and even those who are playing the game for the first time can get the hang of it pretty quickly.

And, of course, there are some new player powers included with the game as well. There are several great things about these player powers that make them an essential addition to the game.

All in all, Danger Circuit is a welcome addition to Downforce, which is a really unique game in and of itself. It gives you more variety in every sense of the word, just by offering more choices and more ways to mix things up.

Try, Buy, Deny: Do you like Downforce? Do you want more Downforce? Then this is 100% a buy for you! The new map adds new challenges and new abilities just add more strategy – totally worth it!