Disclaimer: This review is from a reviewer’s copy of the game that was provided by AEG to Open Seat Gaming, but opinions are our own based on several plays of the game.

Description: We did a review of Tiny Towns itself where we have a description of how the base game is played, so click this link to see that if you need a refresher. Tiny Towns: Fortune expands the game by adding 2 new buildings of each type (except Cottage) as well as 10 new monuments.

It also adds coins to the game and Chests to store them on. Coins can be obtained and spent/lost through various effects (all the new buildings and most of the new monuments interact with coins in some way or another), but the primary way to acquire them is by building 2 or more buildings in the same turn.

A player can store up to 4 coins on their Chest (and some of the new monuments provide a 5th space for a coin once built), and players can spend a coin to take and place a different resource than the one called by the Master Builder (or flipped via the Town Hall cards). Unspent coins are also worth 1 VP each at the end of the game.

Review: Oh, where do I start with this? Let’s go with the art. I’ve already loved the art for Tiny Towns, but I like how they made it that much more apparent that we’re making a town for cute little anthropomorphic animals – mice, birds, frogs, geckos, squirrels, and more. They’re front and center on the cover, and the art is whimsical and lovely. Same with the cards in the game – it all adds to that little bit of fantasy whimsy that the base game already had.

Another great thing about this expansion is the addition of the coins mechanism. Let me tell you just how cool this is – it’s a challenge to get coins; you can only get them by building 2 buildings at the same time or via some of the new buildings, unless your Monument has a new condition that can get you more. But, the coins are super powerful – they can provide you with victory points at the end of the game, sure, but they also allow you to have more control over what cubes you’re putting on your board. 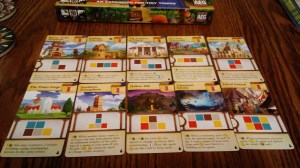 Speaking of the Monuments, they add some really neat interactions into the game, along with a number of special effects that allow you to really manipulate what is going on with your board and the cubes you place on it. One of the ones I really enjoyed was Caterina’s Grotto, where you put four coins in the middle of the board, and when you build a building on one of those four spots, you get the coin from it. Others allow you to place extra buildings, make coins worth more, and other cool things.

In same vein, make sure that you take a good look at your Monuments. Several of them have a little half circle on the left hand side of the card. That is not an aesthetic choice, no, it’s a 5th coin space that we somehow missed when learning the expansion. So, be aware of that when you are choosing the Monument you want to build!

The new buildings are neat as well. As y’all likely know, I’m always a big fan of “more of the same” expansions, that give you some more stuff to try and do without making the game super complex. And the buildings for this are perfect. I agree with the designer note that you should use no more than 4 new buildings at the same time – the mix works really well.

Overall, we absolutely adore Tiny Towns: Fortune. It takes an already awesome game and adds this unique twist that really evolves it into a thinky game with even more choices. I don’t think I’ll ever play without it unless I’m teaching Tiny Towns to someone who is totally new to gaming.

Try, Buy, Deny: Tiny Towns: Fortune is 100% a buy if you like the base game. Not only does it give you more buildings, but it also adds another layer of decision making, which makes my favorite game of 2019 even better.