Disclaimer: This review is from a review copy of the game that was provided by KOSMOS to Open Seat Gaming, but opinions are our own based on several plays of the game.

Disclaimer 2: Some pictures may have spoilers, but spoilers are not discussed in the review. 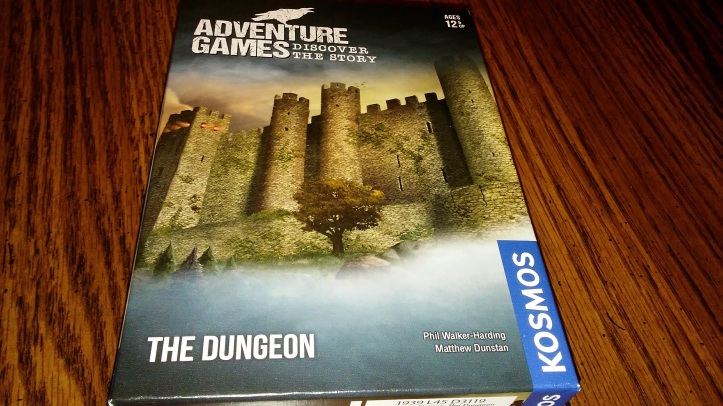 Description: The Adventure Games by KOSMOS are cooperative games that see players solving puzzles, finding clues, and experiencing stories via a system reminiscent of old-school point-and-click adventure games, including multiple possible endings. Players take on the roles of characters within the story and the adventure is shaped to a certain degree by some of the choices that are made. Each story in the Adventure Game series takes place over 3 chapters of about an hour to an hour and a half in length of game time.

Room cards give you the layout of where you are (in the case of The Dungeon, you start out in the namesake dungeon) and have numbered locations, which are areas of each room that players can move to. To visit a location, look up its number in the Adventure Book and read/do what it says.

Over the course of the adventure, Mission Cards will be revealed that give you a goal for each chapter. They tell you what you’re looking for or attempting to accomplish. You’ll also reveal and often acquire Adventure Cards which can range from items you carry to non-player characters you find along the way to afflictions you must then find a way to get rid of/treat.

There is also a very helpful and well done companion app that allows you to type in the numbers and it will read out loud for you the Adventure Book entry instead of you needing to look it up in the book. This app helps whomever is reading not get accidentally spoiled on other parts of the story, which is a fantastic feature.

Adventure Games: The Dungeon has a very well done overall fantasy story line. The decisions you make as you play the game make an impact on what happens to you and your party of characters, as well as leads to different endings. Spreading the game play over three chapters or sessions was a great way to be able to have a longer, richer narrative for the games. This also allows for players to pause at the end of the chapter and pick it back up at a later time. When we played, we played the first chapter on one day and the next 2 chapters the next day, back to back.

Deciding which character in your party is going to complete a task leads to different outcomes in the story, which is a neat twist in cooperative decision making. Each of the four characters has a different main attribute, the yellow player is the Attentive, red is the Strong, blue is the Knowledgeable, and green is the Skilled. The various interactions your party has with non-playable characters, NPCs, is a intriguing aspect of the story as well.  The different endings all offered divergent levels of a befitting conclusion.

The artwork was well done and fit the scene of a dungeon. The map cards gave you a feeling of where you were as each portion of that part of the story went on. If one of the people you plan on playing with has vision issues, they can pick up any part of the game and examine it closer to their eyes, if need be. You are able to see the numbers on there fairly easily, so it’s not difficult to read what you need to put into the app. While some low-vision people may have difficulty noticing some of the smaller details in each room, KOSMOS did as much as they can to try and make it accessible to all.

Adventure Games: The Dungeon packs an emotional, high adrenaline punch into the world of story telling, one off experience games. It’s incredibly streamlined and it worked really well with our group of three. The over arching game system as well as this particular story are top notch, and we can’t wait to try out the other titles that are released in this series.

If you enjoy storytelling games in the fantasy genre, this game is going to be up your alley. The team at KOSMOS did a wonderful job putting together a great system of games and fitting it in to a fairly compact package. This particular story in the Adventure Game series is among my favorites in its genre of games.

Even if fantasy isn’t your favorite genre, I encourage you to give Adventure Games: The Dungeon a try. The unique gameplay and fun story may convince you to try other one-shot games like this!