Classic Callback: The Castles of Burgundy

Welcome to Classic Callback, where Marti checks out some of the great games of the past so that new gamers can get a fresh look at what we think of them! In honor of the new edition of the game, Marti is checking out the beloved Castles of Burgundy, a modern classic from Stefan Feld.

The Game: I’ll admit, sometimes I spend too much time explaining the game. So, instead of reinventing the wheel, go ahead and read Quinns and Paul’s review over at Shut Up and Sit Down. It’s got a lot of detail, and they deserve the click for being pretty cool folks.

Why It’s Worth a Classic Callback:

It has been called the “Beginner’s Feld Game” for a long time. Stefan Feld is a designer with a fairly specific footprint. His titles are what gamers like to call “Point Salad” – you have lots of ways to nickel and dime points again and again and again. While it’s still a bit of a meaty game, it is absolutely a great choice if you’re thinking about trying something from Stefan Feld.

It has a new edition. The 10th anniversary edition of the game just came out in 2019. While it’s still really busy (and Alea still hasn’t figured out how to help colorblind people), the game definitely packs a punch. It includes all 10 of the different mini-expansions that have been designed for the game, so it’s an easy way to get everything for the game.

It offers multiple paths to victory. In my opinion, one of the best things about board games is when you’re able to try something new every time that you play a game. There are so many different ways to get points in The Castles of Burgundy that you’re never going to feel like you’re playing the same game twice. And a strategy that didn’t get you the win in one game may be a great way to win in another. It all depends!

It’s very satisfying – even if you lose. Burgundy is one of those games where, at the end, you’re able to sit back and smile with satisfaction. You can look at your player board and you can see all of the work that you’ve done throughout the game. You feel like you did your best even if things didn’t go your way. And isn’t that a fabulous feeling no matter what game you play? 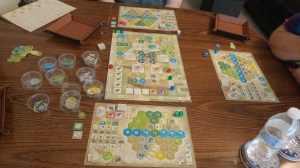 Conclusion: Castles of Burgundy is a fun, thinky game that can help people to step into the world of Stefan Feld games and allow them to check things out. We haven’t tried other Felds yet, but we’re definitely willing to try them out now that we’ve fallen in love with what Castles of Burgundy has to offer. If you like Euro games, you definitely need to check it out – the original version seems to always be on sale for a good price and it’s constantly in print as well.