Open Seat Reviews: Space Base: The Emergence of Shy Pluto

Disclaimer: This review is from a review copy of the game that was provided by AEG to Open Seat Gaming, but opinions are our own based on playing through the campaign.

Warning: Since this is a short campaign, there will be spoilers for the campaign in our review. So, if you want to do this completely spoiler free, you may want to skip on reading this one.

Description: The Emergence of Shy Pluto is an expansion for Space Base, check out our review of the base game here. It includes new cards to play in any mode of the game, as well as a story campaign that takes place over several games (the actual length varies based on how quickly you accomplish the objectives, and some objectives will span multiple games).

Some of the new mechanics include: 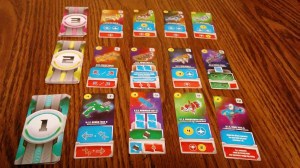 Review: So, if you remember, Space Base was in my top 10 games (and may still be? Who knows, we’ll update in March). I love the engine building and the way that it ramps up, and I just think that it’s a clever game overall.

First, the campaign was really nifty. It was a cool way to slowly introduce the new things to the game, allowing you to become more confident with the way that one type of card worked before you tried another one out. Also, I loved that, as soon as something got introduced, there was a new line you could purchase from – then, after the campaign was over, they were shuffled into their respective decks (1, 2, or 3).

Another great thing about the campaign is that you could determine its length. Most people on BGG said that their campaign was 2-3 games, and we found that to be accurate. We could have made it go longer, but we were typically able to step on the brakes a bit so that we didn’t end a game before the story objectives had been completed.

So, how does Shy Pluto help with game play? Well, first, I love the bonus rolls. Not only is it something fun that you could possibly do on your turn (or someone else’s), but it helps you to get more resources, more quickly. You start buying from the higher tiers of cards faster, which gets you toward the end game faster.

The extra cards with the double arrows and diagonal arrows give you lots of resources as well. There were multiple times where, we would want to buy a card, but we had so many resources that some of them got wasted. The new cards also provided additional opportunities to increase your income, which also helps the game go more quickly. 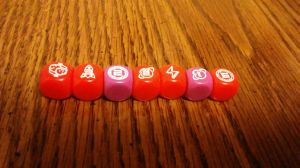 I say all of this to express – I think that Shy Pluto did a lot to help Space Base. One of the biggest issues that a lot of reviewers had with Space Base is that it started to lag at 4 or 5 players – and the bonus rolls and extra reward options have done a lot to speed the game up. A 4 or 5 player game could take upwards of 90 minutes, and those bonus rolls help to cut it down by at least 15 to 20 minutes.

In my opinion, Shy Pluto is a necessary expansion for Space Base, especially if you’re considering the next expansion, Command Station. We haven’t gotten our hands on Command Station yet, but it adds modules for 6 or 7 players, and you’ll need the “speed up” mechanisms introduced in Shy Pluto to make it easier to play at those counts.

Try, Buy, Deny: If you really enjoy Space Base, then Shy Pluto is definitely an expansion you will want to buy. The campaign is fun, the extra cards add some new strategy, and the new strategies really help to increase the pace of the game. If you’re lukewarm on Space Base, give this a try. Those new cards definitely fill in some of the gaps that people notice in the game.