Disclaimer: This preview is from a prototype copy of the game that was provided by Matt Jacobs to Open Seat Gaming, but opinions are our own based on several plays of the game. 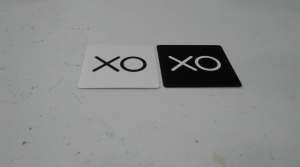 Description: XO is a quick abstract game that challenges you to think outside the box! By adding cards, rotating cards, and adding/removing your player piece to the board, you work toward gaining enough points to beat your opponent!

This 18 card game (16 gameplay cards + 2 cards for keeping score) starts off by taking two (of the three) of each player’s gamepieces and placing them next to the score cards.

Then, you shuffle the rest of the cards and deal 3 out to each player. Then, flip the top two cards onto the table and put them next to each other. The remaining 8 cards are your draw pile.

On your turn you place one of the cards from your hand onto the play area. It must be adjacent (not diagonal!) to a previously played card. The play space will end up being a 4×4 area of cards, and you cannot build outside of those dimensions once they are set. 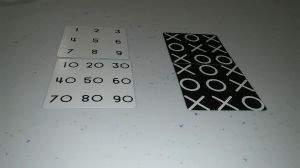 Then, after you’ve placed the card, you take 2 actions, which can be any combination of the following (and you’re allowed to repeat actions if applicable).

Then, after you’re done with your actions, you score. You look at the card that you just placed, and start looking at the lines of subsequent X’s and O’s. Wherever you have created a line of 4 or more X’s; or 4 or more O’s, you get to score that line.

Then, you add that new number to your current score. When you’ve completed your 4×4 grid, the game is over, and whoever has the highest score wins! 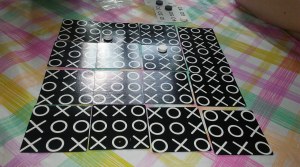 Review: First off, thanks Matt for coming to OSG about reviewing this unique little game! He was specifically looking for diversity in his reviewers, and we feel honored that we were able to check it out.

So, how do we feel about the game? Matt taught it to me at Unpub in March, and I was enamored by it from the beginning. I’ve always been a big fan of abstract games – but an abstract game where you’re manipulating the “board” (made of cards) more often than the pieces you place on the board? It’s something that I’ve never seen before, and I hope it opens the door to some more games like it in the future.

The graphic design/art is incredibly simple. Like, super simple. It’s a bunch of white X’s and O’s on a black background. And while that may bother some people who like a little more color or theme (which is something I typically prefer), it’s absolutely perfect for this. It really speaks to the minimalist nature of the game. On top of that, it’s really little – it fits in your pocket and can go anywhere.

The game is what I like to call “deceptively simple.” That is, once you see a round or two, you think to yourself “oh yeah, I get this.” But, when it gets down to the strategy of it, you’ll find that it’s incredibly brain-burning. Every single card placement, piece addition or removal, and rotation is a very important choice. And, the closer you get to the end of the game, the more important every decision is – it could be the difference between winning and losing in the 11th hour.

My only “negative” for the game is that it can feel more confusing than it actually is. It can be a little hard to describe (it took me several attempts to really get everything sorted out in the description), but once you actually play it with someone, they have that “ah-ha!” moment where they really get a handle on it.

And, as you may expect from my description, this is likely not a game for people who struggle with analysis paralysis (i.e., people who have a difficult time making a move when they are presented with too many choices). But, if you like crunchy choices and both you and the person(s) you’ll play with are cool with turns taking awhile, then XO is a perfect choice.

Launch Info: It still hasn’t been publicly announced as to who is bringing XO out. We’ll update with that information when it becomes available!