Disclaimer: This preview is from a prototype copy of the game that was provided by Laura Erwin Design and Games to Open Seat Gaming, but opinions are our own based on several plays of the game.

Description: In Potions Please, players take on the role of witches to brew potions by collecting ingredients. Once a potion is brewed, you can drink it for a special ability. The first player to brew a potion of each of the 4 colors wins! 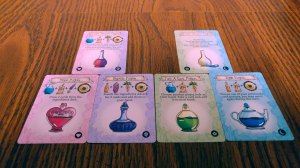 Players begin by selecting a witch (each with a unique, once per game ability), and then are dealt ingredient cards based on player order (the first player starting with less cards and the last player with more). 3 potions are then dealt from the potion deck. Each turn consists of the following 4 steps:

Review: At OSG, we like cute and fun family games that we can introduce to anyone without concern about theme or difficulty. We play with all sorts of people – from young kids, to middle-aged adults, and so we look for games that anyone can learn pretty quickly. That’s why Potions, Please caught our attention.

I (Marti) really appreciate the art direction. While I’m not into the art myself, it gave me the feel of those Polly Pocket commercials that I saw when I was a kid. Since little girls often shy away from gaming (because it’s a “boy thing,”) and we want to see a future where women get more representation in gaming, I feel like it was a solid way to go. The ingredient art is adorable and whimsical, and who doesn’t want to be a fabulously dressed witch?

The rules are fairly easy to learn, and I think anyone 8 and older could really get the hang of this game quickly. The strategy is very, very light, and kids can grasp onto that strategy in a game or two.

The only issue we had with the game was with a couple rule clarifications – we weren’t sure if the wilds stayed locked on the 5th market spot; if the card on top of the deck can be brewed, and if you can brew more than one potion of a particular color. But, those are minor clarifications that don’t take away from the fun and intent of the game.

There is some “take that” in the game, but it’s light-hearted fun, and it’s a great way to teach younger kids how to cope with someone doing something “mean” to you during a game. It could be drinking someone else’s potion, or stealing their ingredients – but it’s all in the name of being the best witch! 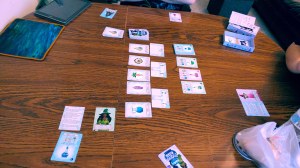 Overall, it’s a little bit of take that, a little bit of “Go Fish,” and a lot of potion making fun for all ages. It’s definitely a step up from Uno and other small card games, without forcing families to dive in face first to something too complex for them.

The Game Crafter Info: Potions, Please is currently on a crowdsale on The Game Crafter. The more people buy it, the cheaper it goes! It’s usually $20, and at the time of this writing, it’s $14.82.

Game On!
The Meeples of OSG