Disclaimer: This preview is from a prototype copy of the game that was provided by Talon Strikes Studios to Open Seat Gaming, but opinions are our own based on several plays of the game.

Description: We are (literally) cub campers, getting ready to embark on the world! And in Camp Pinetop, you’ll be collecting badges, traveling to landmarks, and going up in ranks until one of you becomes the prestigious Badger!

You start by putting out a grid of landmark cards of each color (green, blue, and grey), which is determined by player count. Then, you’ll put out 4 different mastery cards, which are unique goals you complete during the game where you can get extra badges for free. 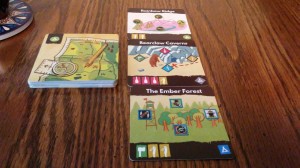 Choose a 1st player. They get 5 equipment cards, every other player except the last player gets 6 (unless playing 2 players). The last player in a 3 to 5 player game gets 7. Then, starting with the first player, each player puts one of their 4 campers on the board. Then, gameplay begins.

There are 4 actions you can take on your turn.

1. Move your camper 1 landmark away. You cannot move diagonally.
2. When moving, pay the equipment card costs on the bottom left of the landmark to get the badge located in the direction you came from.
3. Draw 2 cards. The draw areas are in 3 parts – 2 cards to the left of the deck, the deck itself, and 2 cards to the right of the deck. You may either draw 2 cards from the same side of the deck, blind draw both cards from the deck, or blind draw 1/choose to draw the other. If you draw a wild from either side of the deck, you only get to draw that card (similar to Ticket to Ride).
4. Place a new camper on the board by paying 2 equipment cards with the same color symbol as where you’d like to place it.

Throughout the game, you’ll be collecting 3 different types of badges – blue squares, green circles, and black diamonds. When you collect a badge, you will get a reward as explained on the card.

As you gain more badges, you will go up in rank on your player board. The second rank (skunk) requires 2 of any color badge. Then, you will need to gain different combinations of badges and advancements (upgraded badges) in order to move up through the ranks of Beaver, Raccoon, and Badger. The first camper to get to Badger (rank 5) is the winner!

Review: Camp Pinetop is a very clever, unique game. We saw it for the first time at Unpub in March, and I was immediately drawn to it. Sarah and I absolutely love any theme related to the outdoors, and this offered that in spades. It was called “Scouts” then, but they had to change that because the Boy Scouts of America has the copyright on that term. 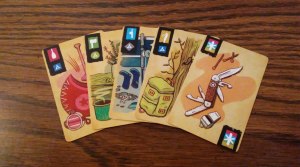 The art is so reminiscent of old-school scouting books – right down to the text and pictures! The cartoony feel of the art is amazing and we really enjoyed how everything comes together. And, even though the cards that make up the board each have different art, it still looks like a map with different locations! How cool is that? It makes it a great little title to play.

There is a lot of strategy packed into this little package. With the different badges and such, you’re tasked with looking at absolutely everything that is out on the board. You can’t miss a single detail, and you’re constantly watching what your opponents are doing so that you don’t make an error.

On top of that, it gives you a little bit of an abstract game feel, without being an entirely abstract game. You have to plan out your moves carefully – and, if you end up on the same space as someone else, you have to give them one of your equipment cards! So, you have to weigh out choices and decide when it’s okay to hand off an equipment card so that you can get that one badge you need for something.

I also liked some of the built-in catchup mechanisms in the game. The biggest one was the hand limit – the higher rank you are, the fewer cards you can have in your hand at the end of your turn. So, it helps to slow you down and gives your opponents a chance to catch up with you. Run-away leaders did not feel like an issue.

We did enjoy the fact that you don’t necessarily have to play mean. Even though some of the rewards from earning badges include moving cards around and moving campers around, you can do it in a manner that benefits you without hurting anyone else if you’d like. But, if you want to be aggressive, you can be! 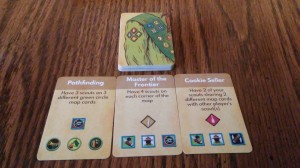 During our plays, I was a little concerned about there being one dominant strategy – so much so, I asked to use it instead of the person who kept trying it. I quickly learned, that strategy wasn’t the reason they kept winning. While there are definitely some powerful strategies that can emerge, it’s more about how well you are able to utilize the badges and the masteries to your advantage.

All in all, Camp Pinetop is a beautiful little game with strategic depth and a fun theme that you don’t see too often. We are so excited that we got to preview this fantastic little title!

Kickstarter Info: Camp Pinetop is on Kickstarter RIGHT NOW! You can back it here for just $20, or back it at the premium level (with a mini expansion) for $25. Shipping will be calculated after the campaign.