Disclaimer: This preview is from a reviewer’s copy of the game that was provided by Button Shy to Open Seat Gaming, but opinions are our own based on several plays of the game. 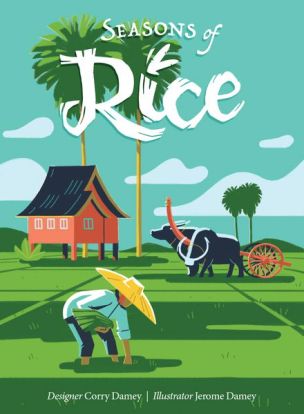 Description: In Seasons of Rice, you’re a farmer, puzzling together your landscape and trying to expand your territory in a manner that is going to help your family get the best harvest possible this year.

In this unique game, players are going to draft cards in order to close off paddies and earn points. You draft in two separate game phases, known as “seasons.”

First, each player is dealt 2 cards. On the back of each card is an ancestor, and each of them has a different scoring goal. You choose which ancestor you want to use, and that card is also is used to keep score during the game. The other card is flipped over and the landscape on it is used for your starting tile.

Then, the rest of the cards (14) are dealt out to each player. Then, the Wet Season (phase 1) begins. During this season, each player will draft 2 cards at a time. One card is for their landscape, the other goes to a line of cards that will be drafted in the next phase. Then, you switch hands. You continue doing this until there are no more cards.

Then, it’s the Dry Season (phase 2). In this season, the person who is furthest behind in points begins. You’ll draft cards from the line you created during the Wet Season, adding them to your landscape and scoring them in the same manner. When all the cards are gone, the drafting and building part of the game is over.

At the end of the game, you resolve any scoring conditions that say “during final scoring,” and whoever has the highest score has the most fertile rice paddies!

Review: Seasons of Rice is a beautiful testament to the designer’s Cambodian heritage. I absolutely love the art on the cards – it’s whimsical and, while simple, it transports you to those rice fields. The green fields, the lovely (but puzzly) paths, and the houses and buffalo are all lovely.

If there was one word that I’d use for this game, it’s zen. I love tile laying games (or games that use cards as tiles, like this one), and this is no exception. Sarah and I sat at our card table, chatted, and relaxed while we were enjoying this game. And I could see us coming back to this one again and again

This is also really reminiscent of my favorite game, Carcassonne. And if you know me, you know that it’s quite the compliment to  be compared to Carc. You’re making many of the same decisions, and while it’s definitely different in terms of scoring, it’s a unique puzzle that you’re putting together differently every single time that you play it. 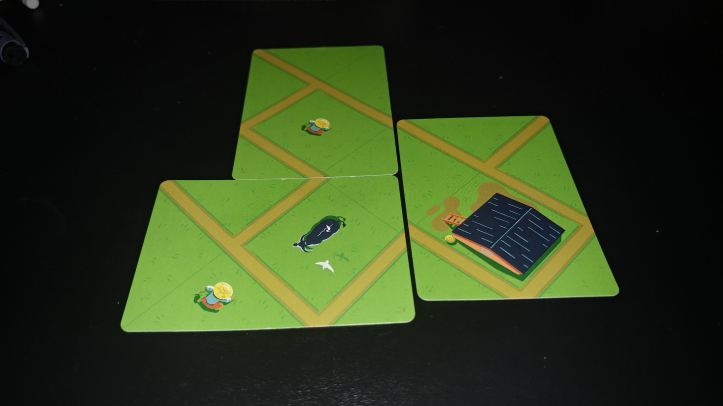 The variable scoring options from your unique ancestors are one of my favorite parts of the game. You get to choose between two ancestors at the beginning of each game you play, and every single time, I found myself trying yet another new option that I hadn’t tried before.

Button Shy continues to impress me by bringing more and more games to my collection that are unique and full of depth. I will never cease to be amazed by how much you can do with 18 cards, and I am so glad that they are doing what they do in the board game sphere.

Kickstarter Info: Seasons of Rice is on Kickstarter right now! You can find the link here. You can back for $10 + $2 shipping, or you can back at higher levels, combining this title with other Button Shy titles, at their Kickstarter page.