Disclaimer: This preview is from a previewer’s copy of the game that was provided by Alderac Entertainment Group (AEG) to Open Seat Gaming, but opinions are our own based on several plays of the game. 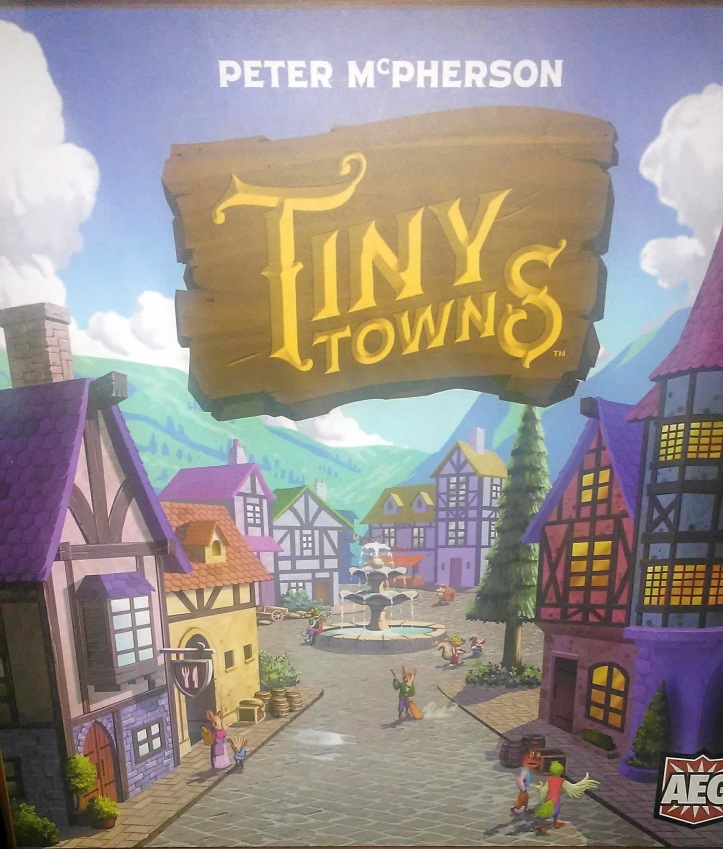 Description: Tiny Towns sees players competing to build a town on their 4×4 grid board that scores the most points at the end of the game. There are several types of buildings that can be built in towns and at the beginning of each game a card is dealt (or chosen) for each building type that tells you what that building does and how it scores that game (as well as gives you the resource types and pattern required to build it). Each player also has a single monument they can build and each player has a unique, hidden monument card with different patterns for building and different effects/scoring that are only revealed once built.

Each turn, the current “master builder” declares a resource type (there are 5 different resources) and each player must take a cube of that resource and place it in an open space on their board. Players must keep in mind what buildings they are wanting to go for and the patterns required (think Tetris pieces but with different colored resources mixed into the shapes). After placing the resource cube players can then optionally build any building(s) they have the right pattern of resources for. They clear the resources for that building from their board and place the building in one of the spaces that previously held a resources used to build that building. The next player then becomes the master builder.

The game continues until all players are no longer able to place resource cubes in their town (as they can only be placed in empty squares). If a player runs out of room before other players, they are out of rotation for master builder and it passes only between players still able to place resources/build buildings until everyone has run out of space. Resources left on the board are then cleared (empty spaces are worth -1 point), points are calculated for buildings built, and the player with the most points wins!

Marti: There is a lot that I could say about Tiny Towns, but the big word I want to get out there is this: elegant. This game is so solid and has such lovely moving parts that I’m shocked that something like it hasn’t come out before now.

The puzzly nature of the game is what attracted me to it in the first place. Not only is the game really clever, but the puzzle can be very challenging. The game is deceptively simple to learn – you put out cubes; when you complete a pattern, you can put that building on any of the spots the cubes were located. But, when it comes down to it, it’s really hard to master it.

I enjoy both the “town hall” variant and the “bingo calling” original way to play the game – both have their merits, and both make the puzzle a little different every time that you play the game. Mix in the fact that the buildings are always going to score differently (based on which ones come out) and you’ve got a game that offers a different challenge every single time.

The components for the game are top-notch, too. AEG’s components have really been knocking it out of the park lately, and Tiny Towns is no different. The game is absolutely lovely to look at and the table presence is fun, too. When you play it in public, people are always stopping to check out what’s going on.

As reviewers, we don’t always have the opportunity to get games to the table when we’re done reviewing them. But I can guarantee that Tiny Towns is a game that we will bring back to the table again and again, well into the future.

Sarah: This is an impressive game. Great spatial puzzle of trying to build up your town all within the confines of an ever decreasing 4×4 grid. Getting your buildings in the correct places to combo with your other buildings, all the while trying to keep room for more buildings is one of the main challenges of the game. Your brain is always working on how best to construct your own hamlet.

The art is appealing and the production value is great. You don’t really feel like you are necessarily constructing your town for the anthropomorphic animals on the cover of the box or in some of the artwork, but it is charming nonetheless. The card art is well done. The wooden buildings are nice and chunky. I love the hammer, which denotes who is the master builder. Having the hammer as active player marker fits in with the theme of the game.

I love the variable modes of play available for Tiny Towns. The main mode, which is utilizing the Master Builder to call out resources, is fun and excellent. Town Hall mode allows for the deck of cards to determine two (out of every three resources) and then the third is each players’ choice. This mode also allows you to play along with online play-alongs. You can compare your scores to others who have played and those who made the videos.  Three of these are linked at the end of the review.

Tiny Towns is a fun, easy to learn, and brain-burning game that plays in around 30 minutes. If you enjoy city building and puzzly games, there isn’t much more you could ask for.

Scott: The first time I tried this was at Unpub back in March, the designer was demoing a work-in-progress expansion for it, and even with the unfinished expansion stuff mixed in I immediately liked the game. Having played the published base game many times since, it has cemented itself as one of my favorite quick games (20 mins or so with an experienced group).

I love puzzles and this game is basically just a continuous puzzle to maximize the usage of a limited amount and shape of space. I almost always mess something up or have to put something in a less useful place, but it speaks to the level of fun in the game that it’s still thoroughly enjoyable and I keep coming back even after that happens.

There’s a variant that uses a deck of cards instead of having a master builder calling out resources, and we’ve actually found it makes for a more enjoyable experience. We here at OSG like to play friendly even in competitive games, so sometimes when you really need a certain resource but it’s not good for someone else it can feel bad to cause them strife just to get the resource you want. The deck helps alleviate that as it’s randomized but also includes the ability for everyone to choose their own resource after every 2nd card (you draw a card and place the depicted resource, draw another card and place, then everyone can pick a resource to place, and you repeat this 3-part cycle).

Game On!
The Meeples of OSG

Play Alongs: So, since Tiny Towns is a bingo-style game, several content creators that we know have hosted play-alongs on their YouTube channels! Check them out here: