Disclaimer: This review is from a reviewer’s copy of the game that was provided by Breaking Games to Open Seat Gaming, but opinions are our own based on several plays of the game.

There are two phases to the game – the dusk phase, where you’re building out the board; and the night phase, where you are allowed to overlap stars. The board is a 7×7 grid. 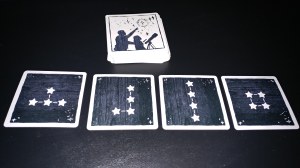 What’s the goal? To fill a row or column completely with your player color (brown or white). When that happens, the entire row or column clears and you get a shooting star point.

Dusk Phase: When it’s your turn, you flip over a card and get a constellation that has four stars in it. You use that picture to put together a pattern anywhere on the board, but you cannot go on a space where your opponent’s star already is located. 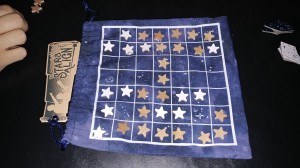 Night Phase: When a player draws a card and they are unable to make the pattern without overlapping any previously played stars, then the night phase begins. From this point forward, even if you have a blank area where you could potentially play your pattern, you are allowed to put your star on top of an already placed star. (In all honesty, you’re just flipping the star to the opposite side when you’re using it – the overlap term is used for younger players that may not be able to picture the pattern correctly otherwise). The only restriction is that you can’t flip more than 3 of your opponent’s stars when you’re making a pattern. If you end up “overlapping” one of your own stars, you actually flip it to the opponent’s side.

You keep doing this, clearing rows or columns when they’re all one player’s color, until one of you gets 5 shooting star points which, awesomely enough, are the shape of a star when you put 5 of them together. Whoever does that first is the winner!

Review: First, let’s talk about the components of this neat little game. All of the bits fit into this pretty, little cloth bag, which then has the 7×7 board printed on the back of it. Everything is really lightweight, but I don’t feel like I’m going to break anything. The wooden stars are white on one side, and naturally colored on the other, which is how you differentiate between the players’ stars (one player is white; the other brown). It’s easy to toss in your bag so that you can play whenever you want to do so.

There is definitely a puzzly element to this game that intrigued both of us. You’re constantly looking at the board, trying to sort out where you want to put your constellation so that it gives you the biggest benefit without also putting your opponent into a solid position, especially during the “Night” phase of the game.

While playing, Sarah said that this reminded her of the ancient game “Go,” because of the way that you’re controlling the board. You need to control a good percentage of the board to be able to put yourself into a position where you could “capture” a row or column. 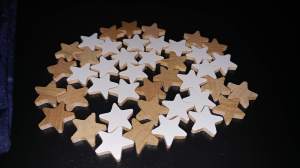 I definitely consider this game “easy to learn, hard to master.” The tag on the game says that it’s for ages 6 and up, and I believe that a 6 year old could easily learn this game and play it. But, at the same time, adults can get a lot out of it because of it’s potential tactical complexity. The fact that this game could appeal to pretty much anyone is a big “plus” in our book.

My only concern is in regards to how the rules are written – it took Sarah and I a little bit of time to understand the “overlap” mechanism, but once we pieced it out a bit, we got what they meant. I’m not sure how they could word that more clearly, because it’s something you kinda have to see in order to get what they mean.

Sarah and I both really enjoyed playing this unique little game. We’re usually Care Bears, but when it comes to abstract games, Sarah and I are kind of cutthroat. We enjoy the strategy that goes into abstract games and how the different pieces end up falling together as we play. She kicked my butt, of course, because she has more patience than me (haha). 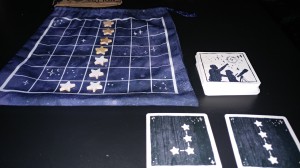 Try, Buy, Deny: If you like abstract games like War Chest, Onitama, and even regular chess, then this portable title is something that you want to buy so that you can throw it in your bag and play anywhere. If you are “iffy” on abstracts, then you want to find a way to give it a try anyway. It’s a really simple little game and it’s definitely a fun little challenge.