It’s OSG’s 2nd birthday month! In celebration, all of us meeples are taking a look at our updated Top 10 lists, describing our thoughts about the games on them.

10. Pandemic: The Cure – Pandemic (which I’ll talk about more in my Top 5, so stay tuned later this week for that!) is a pretty classic game at this point, in the realm of Catan, Dominion, and such as far as Gateway games. The Cure takes the same idea but turns it into a dice-rolling version that can be just as edge-of-your-seat exciting as the original game but with a completely different feel to it. Saving dice to roll for cure samples is necessary to win the game, but also means you have less options on your turns until you can get the cure successfully rolled, but you can also pass samples to other players to make a combined effort at the cure, and I really like that resource management aspect which makes it unique and an excellent game that can stand proudly next to its older sibling.

9. Flash Point: Fire Rescue – Flash Point is one of those games where, as soon as I heard about it, I knew I had to go all in. There is a TON of content for this game, which is good because it’s a great game! The mechanics are solid, and the expansions add a really nice variety of changes (both in different boards and just in new mechanics) that you can gradually try as you play through the content. It’s fully co-op and the fires are at the mercy of dice rolls, which can lead to some really edge-of-your-seat moments as you get down to the wire of rescuing people before the building is completely lost. A bunch of different roles available for the players to use allow for all sorts of cool combos between characters, and also just different playstyles for the same basic “jobs” (i.e.: someone specializes in putting out fires, another player specializes in rescuing people, etc.).

8. T.I.M.E Stories – Story games are some of my favorites. Games with a narrative, especially co-op ones, are just so enjoyable for me because it adds another layer on top of the gameplay itself. T.I.M.E Stories is one such game that makes it onto my Top 10 because I think it has a pretty good system to it that allows it to tell so many different stories and take you through wildly varying narratives, while keeping a footing in similar base mechanics. Once you’re used to how to navigate and interact with the world, you can focus on seeking out and enjoying the story. Even the dead ends have a bit of story to them (though you then have to avoid them for efficiency in subsequent runs!). Replaying the stories after running out of time can get repetitive if you aren’t taking notes of where things are or particular areas you need to visit to progress, but so far in the stories I’ve played it hasn’t been to the point of getting sick of the story before finishing it, which is good. I’m excited to finish out the white box series, and to see where they take it with the upcoming blue box cycle!

7. Thunderstone Quest – Spoiler for the other half of my list: this is the only non-cooperative game on my Top 10 (though the latest expansion adds co-op to the game). Deck builders are my favorite genre of game, especially deck builders that have more to do than just add things to your deck. Thunderstone Quest has a lovely RPG feel to it, and it’s a unique deck builder in that some turns you choose to delve into the dungeon rather than focusing on acquiring cards for your deck. I find it a really interesting dynamic and variation from a “traditional” deck builder, and it works really well as the RPG/dungeon-delving aspect of the game and the deck building are intertwined at all levels. Take too much damage in the dungeon? Your new hand of cards for every turn (whether in the market or dungeon) is reduced until you can heal. Buying things at the market? Better keep an eye on what’s in the dungeon and develop a strategy for getting in and getting what you need done. 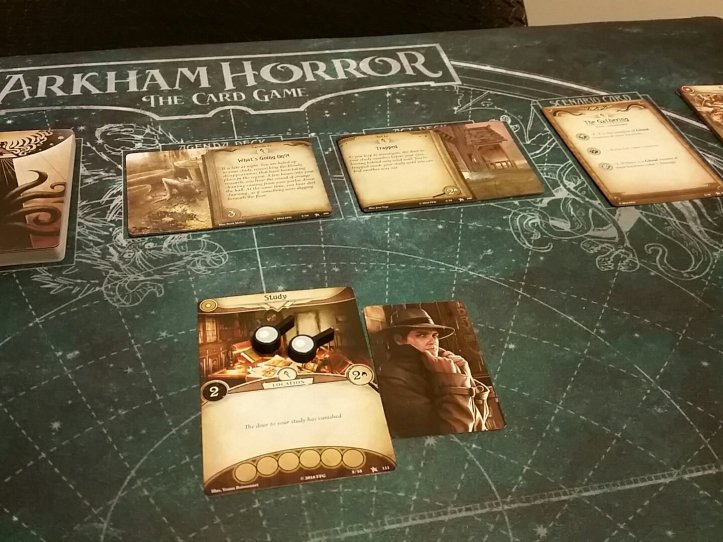 6. Arkham Horror: The Card Game – This is the first Arkham Horror game I’ve gotten and played (not the first Lovecraftian mythos game, but the first in FFG’s Arkham Horror series/universe) and I fell hardcore in love with it. I’ve collected almost the entirety of the first 3 cycles, all the novellas, the Investigators of Arkham Horror huge book that’s chock full of story and lore, and all the stand-alone scenarios. I haven’t played most of it yet (as I like to take my time and enjoy the story) but the game mechanics are solid and the theme is definitely one that appeals to me, and together they make a really enjoyable experience. The deck customization aspect makes it interesting and fun to try different combinations of cards in your deck(s) (I play solo with either 1 investigator or 2) as well as different combinations of investigators. One of the coolest parts about the game is that there isn’t necessarily a “best” resolution for each scenario, and being defeated doesn’t always mean the campaign ends. Oftentimes your investigators pick themselves up, get some better equipment (cards), and carry on to continue the fight against the darkness.

Check back tomorrow for my Top 5!