In honor of our 2 year anniversary, Sarah, Scott, and I are all looking back and seeing if and how our top 10 games of all time lists have changed since we started this adventure – and change they did!

Yesterday, I talked about my numbers 6 through 10 – and today, I’ll be chatting about 5 through 1! Enjoy!

5. World’s Fair 1893. This was the first Kickstarter I ever backed, but I can tell you that it’s not in my top 5 because of the hype – I find it sad that this game really didn’t the attention it deserved. This game is simple to understand, but every single decision is important, from the first turn of the game until the last turn of the last round. It’s a balancing act like no other, and while it’s an area majority game, it’s using an atypical historical theme for that mechanism. Many area majority games focus on war – and while that’s totally fine, I’m always looking for new historical themes, and they nailed it here. Sure, you don’t feel like you’re at the World’s Fair, but the flavor text and art really help to make this a unique, exciting game that I love bringing to the table.

4. Codenames Duet. Ah, yes, a word/party/large group game. Notice – I said Duet. Codenames itself is in my top 50 games (I have apparently played 350+ games, FYI, so 50 is still pretty good). But, Duet grabbed my mind the first time we played it. I feel like the game is a lot more exciting, because you’re constantly working together and dancing around the board in order to try and avoid multiple assassins. It’s definitely not an easy game, but it’s totally fun and worth the tension. We haven’t tried the included campaign yet, but I thought that was a fantastic way to get people more engaged with it, and I can’t wait for us to try it.

3. Adrenaline. Yes – two titles from CGE in my top 5! While I don’t always go for their games (some of them are just super heavy), their lighter titles have always caught my eye. Adrenaline is such a strange outlier here, however. It’s not about the theme – I hate first-person shooters (gimme an MMO, puzzle game, or turn-based RPG any day of the week). I enjoy the the sheer genius of the mechanisms – an area control game that really does it right. It’s a Euro game through and through – taking smart moves, and getting area majority against other people. It just has an FPS theme on it, and I think it makes it much more accessible than many other games. It’s fun, it’s thinky, and it really brings you in for the long haul. 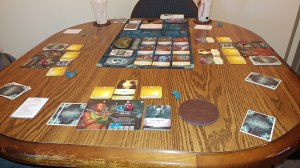 2. Aeon’s End. This is probably the biggest “upset” on my list. I didn’t get to try Aeon’s End until early 2018, and the first time I played it, I was hooked. This game is so refreshingly unique in its style. I mean, come on, who ever realized how much more strategy is in a deck builder if you don’t ever shuffle the deck? Oh, my gosh. The theme caught my imagination (atypical post-apocalyptic is always intriguing to me) and the characters are so darn diverse and awesome. From the first time that I played the game, I always want to go back for more. We’re playing through Legacy right now, and it just continues to bring me more and more into the world of Aeon’s End. It’s a fantastic Legacy game, but the entire system is just genius and I can’t wait to get it to the table more.

1. Carcassonne. SURPRISE. Not really, haha. If you’ve been around the blog awhile, you know that I’m mildly obsessed with this classic tile layer – it was even featured in a Classic Callback. And the thing is, I truly believe that no other tile laying game does it better. Maybe if you really want a tile laying game plus something else, but if you just want to enjoy building the countryside and seeing what happens, then Carcassonne is the best of the best. And, you can also play mean – Sarah and I just don’t do so, haha.

There is a small caveat here – I also believe that Inns and Cathedrals (the first expansion) should have been in the box from the beginning. The base game of Carcassonne is awesome, but Inns and Cathedrals and Expansion 2: Traders and Builders make the game the star that it is in my mind. These little expansions take what is a simple, elegant gateway game and makes it the medium-light Euro that I’ve fallen in love with.

Also, as time has gone on, I’ve also discovered that it’s the system of Carcassonne that I love. We now have multiple expansions and multiple spin offs – including The City, The Castle, Safari, Over Hill and Dale, and The Discovery. We’ve also played South Seas. And, other than The Discovery (which I found to be the weakest), I consider every spinoff we’ve played to be just as good as the original. The basic ideas of “roads, cities, cloisters, and farms” are present in every spinoff – they just have different names based on the theme, or they work a little differently.

So, my number one didn’t change, but there was a lot of mixing up all through my top 10 (and even into my top 20). How many of these have you played? Are any of your top 10 games the same as mine?