Disclaimer: This review is from a reviewer’s copy of the game that was provided by Brain Games to Open Seat Gaming, but opinions are our own based on several plays of the game.

Description: Pikoko is a beautiful game that throws a twist into the traditional trick-taking genre. Each round, players are dealt 8 cards. The twist? You don’t see the cards dealt to you. You place them facing outward in lovely peacock-themed card holders so that all other players can see them, and you can see all other players’ cards. The trump suit is then revealed by flipping the top card of the undealt, extra cards. 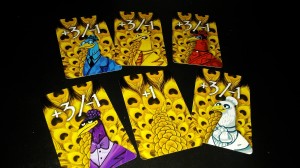 The tricks are then played out with each player playing cards from the hand of the player to their left. Once all 8 tricks have been played the bids are compared to tricks taken, scores tallied, and the next round begins. After 3 rounds the player with the most points is the winner!

Review: Trick-taking has been a regular mechanic of card games for decades upon decades. My 92-year-old grandfather still plays Bridge regularly, as it’s such an important part of his life. There are many games with variants of the trick-taking mechanic, but few that throw a twist into it like Pikoko does. And what a twist it is.

Seeing everyone else’s cards and not your own is such an interesting change from standard trick-taking, it puts you in almost a completely different state of mind. You are required to consider how best to play the cards of the person to your left, in relation to the other players’ cards, rather than how best to play your own cards. And rather than bidding on a single player’s/team’s tricks, or for trump like other games, you’re bidding on the distribution of tricks amongst all the players, including your own, hidden hand. It leads to some interesting decisions and is a refreshingly different view of a normally straight-forward mechanic.

The game plays very smoothly, and it’s such a smart setup that works really well. The art is lovely, and the backs of the cards are nice to look at (which is not something you often pay attention to in card games). They actually look like feathers which makes the art style (with the peacock card holders) a perfect fit. Bids for specific players often end up at similar amounts from other players, but it’s in the small differences (a bid 1 or 2 higher/lower from one player, for example) that can lead to the hands playing out entirely differently than you had thought they would, and that really is where the game shines. This is especially true with higher player counts: it plays well at 3 but we had more interesting interactions and crazy hands play out at 5.

Try, Buy, Deny: If trick-taking is something you really enjoy then Pikoko is definitely a Buy for you. Even if it’s not a favorite mechanic, I think the majority of people will like this game and would recommend at least giving it a Try, if not a straight-up Buy.