Disclaimer: This review is from a reviewer’s copy of the game that was provided by Stuff By Bez to Open Seat Gaming, but opinions are our own based on several plays of the game. 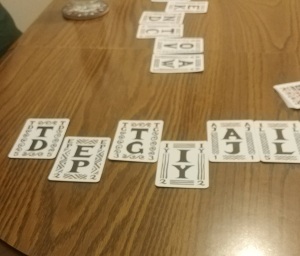 Note: So, this is the second in a series of reviews that are going to be a little bit different. The Wibbell++ system is a really unique system developed by Behrooz Shahriari, better known as “Bez.” The basis of it is this: If you can get a lot of great games to play with a traditional deck of cards, why aren’t we creating more decks of cards that you can utilize to play multiple games?

That’s why she started the Wibbell++ system. And, in the spirit of that innovation, we’re actually going to review several of the games that have been developed by Bez and other Wibbell++ enthusiasts. The next edition of the game will be coming to Kickstarter later in the year! 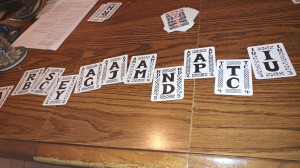 Description: At the beginning of the game, each player is dealt 3 cards, and they choose one to keep – that’s going to be the card that they build upon for their alphabet.

How do you get cards? Easily. The person who dealt the first 3 cards starts. They flip a card from the deck over and they have the option to keep that card or to pass. Then, the person to their left has the same choice, continuing around. If no one takes the card, it’s discarded. A person can only keep a card if they have a legal placement for it – they need to be able to add it to the far left or far right of their line.

As you can see above, each of the cards has 2 letters on it – so you can use either letter to continue your alphabet. You can play to either side – the right or the left – of the first card, but the alphabet has to continue in alphabetical order (not necessarily consecutively). In the picture, I started with the A/M card as my center card, and then built out on both sides from the M. My final alphabet is A/B/C/E/G/J/M/N/P/T/U and I scored 11 points, which is a pretty solid round.

A round ends when 4 cards have been discarded or when the deck runs out (the latter is rare). You then score – each card is worth 1 point. You then play another round the same way. The game ends when someone has accumulated at least 25 points between all of the rounds that have been played – at that time the player with the most points wins!

Review: First off, let me tell you, I’ve never recited the ABC’s so many times in my life. You sit there and recite them over, and over, and over again to see if I should take a card that was flipped. Sometimes, you take chances and accidentally put A all the way to the left and now you have to always go to the right and it’s crazy.

This game is fun, it’s quick, and it’s competitive. It’s very light, but it’s actually really entertaining and you will have a lot of fun when it comes to trying to put your alphabet together. You’re constantly watching your opponents to see what they are doing and working out all of the details in your mind so that you can stay ahead. In short, it’s easy to learn and I really enjoy it. I think kids that are learning their ABC’s would kid a kick out of this family weight game as well.

Alphabetickell is an excellent game and a lot of fun to play and enjoy together. If you’ve taken the time to check out the Wibbell++ system, you want to try it out. Bez is always working on making the games in the Wibbell++ system even better, so we played the most updated version of the Alphabetickell rules here. Keep your eyes peeled at her Twitter to keep up with things!