Expansion Review: Smash Up: Oops, You Did It Again

Description: Oops, You Did it Again is the 15th set for Smash Up according to the SmashUp Wikia. I assume that includes promos, goodness me.

If you want to know the rules for base Smash Up, you can check out our Classic Callback from May. This expansion has 4 new factions – Vikings, Cowboys, Ancient Egyptians, and Samurai. Other than that, there are two new mechanisms in the game that you need to be aware of.

Duel: When a card that has the keyword “Duel” is played or triggered (one of the bases has the keyword), the Duel begins. The text on the card indicates which minions are involved in the duel, and each player that controls a minion has the option to play one action in order to change the outcome of the duel. The consequences of the Duel are also explained on the card. The Cowboys and the Samurai are the only factions to have Duel as a keyword thus far.

Bury: The Ancient Egyptians have some cards with the keyword “Bury,” where you simply play a card facedown on a base. Uncovering that card (which you can do for free once per turn or you can do via triggers on other cards) causes the text on that card to be resolved. 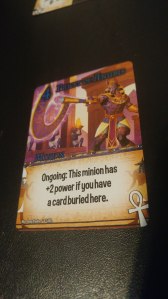 Review: I’ve always thought that Smash Up was best at 3, because it has a lot more back and forth than if you were playing with just 2 players. But, the fact of the matter is, I feel like Oops, You Did it Again adds a level of interactivity that makes it that much more fun at 2. The Bury and Duel mechanisms make it so that you’re more likely to go for the same bases and make it a bit more tactical.

I think that the Vikings are actually my favorite faction in this expansion, because they have a few cards that raid and pillage the other players’ decks, which is always hilarious and ends up with some crazy interactivity between your cards and the cards in your opponent’s deck. Also, because the art and the awesome Viking ladies make it a great time as well. Sarah was super fond of the Vikings as well.

Scott enjoyed the Ancient Egyptians – partially because of his love for Ancient Egypt, but he also enjoyed the strategy behind the bury mechanism. The Duel mechanism in the Cowboys and the Samurai can be pretty neat – I think I just need to play with them more in order to have a solid handle on when to do, when not to duel, and how to use it in a tactical matter that can give me a leg up when trying to win a base.

Smash Up: Oops, You Did it Again is a fun addition to the already chaotic shufflebuilding game. I’m all about everything Smash Up and I love that they are continuing to add support for the game.

Try, Buy, Deny: If you love Smash Up, then Oops, You Did It Again is definitely a buy. The new mechanisms, the fun factions and the art all come together to make this the perfect addition to anyone’s Smash Up collection. If you don’t like Smash Up with 2 players, I definitely recommend that you try it at 2 with these factions mixed in.  I don’t think it will change your mind if you don’t already enjoy Smash Up – it’s still Smash Up, with a couple of twists!