Disclaimer: This review is from a reviewer’s copy of the game, provided to Open Seat Gaming from Alderac Entertainment Group (AEG). The opinions are our own, based on several plays of the expansion.

Description: Mystic Vale is a card-crafting variant of the deck-building genre. You have a static 20 cards in your deck that you add advancements to over the course of the game, rather than adding or removing cards from the deck itself. Each card has 3 slots for advancements, though some begin the game with good or bad ones already in them.

Each turn begins with you prepping your field which consists of revealing cards from your deck and adding them to your field (your play area) until those cards, plus the “on-deck” card (the card face-up on your deck but not considered in your field), have a total of 3 of the cursed land symbols. You then can decide if you want to push your luck and flip more cards, or stop with what’s in your field. If you reveal a 4th bad symbol then you spoil and your turn ends.

If you don’t spoil, you can use the mana, symbols, and effects from the cards in your field to acquire up to two advancements and/or vale cards (they give bonuses and/or end-game scoring). The game ends after a certain number of victory point tokens have been claimed by players (based on player count, and the tokens are granted by various effects and advancements).

Twilight Garden is a stand-alone (ish) expansion that introduces new advancements, vales, and leaders (these were introduced in a previous expansion and take up an entire card in your deck but have powerful effects, and can be upgraded for even better effects!). It’s stand-alone ish because you can use just the advancements and vales from Twilight Garden to play the game, leaving out everything from the base game except the player decks and fertile soils (so you still need the base game to play but you aren’t using everything from it). You can also combine its content like the other expansions if you want a mix and match game.

The biggest thing Twilight Garden introduces are curse tokens, which are worth negative points at the end of the game. Some cards have powerful effects but give you curse tokens every time you use them. There are a few cards that can get rid of your curses, but those are few and far between. Aside from curses, the expansion has a plethora of other new and different effects and cards as well!

Marti: There is so much content for Mystic Vale that it can be difficult to keep it all in order – in the future, we plan on doing a few other reviews on the many expansions and what each of them offer. But, let’s take a look at this one.

As someone who has played quite a bit of Mystic Vale, I found that Twilight Garden brings a whole new element to the game. We tried it several ways – instead of the base game, alongside the base game, and mixed in with several expansions. It definitely makes the gameplay a bit different and you need to be sure to look at things differently as you’re playing.

Curses are one of the biggest changes in this expansion, and if you’ve ever played Dominion, you’ll understand the concept. These chits give you negative points at the end of the game, which can be problematic if you don’t find ways to mitigate it. The first time we played the expansion as a base game replacement, I ended up with a negative score at the end. This wasn’t a bad thing – I just really had to balance things better with my strategy.

I actually really liked it when it was mixed in with the other expansions. It offered some variability on what you’re used to in the game, and it gives you some really powerful options for card building, but they have a downside so you have to be aware of that as you’re putting together your deck. Some of the Leaders available are also super powerful but are either difficult to flip to their powerful side, or they are negative points at the end of the game, or there’s some other downside associated with them.

This expansion was totally made for people who already love Mystic Vale and wanted to try something different. We’ll be using it as extra content, but I could see some people (especially those who enjoy “take that” more than we do) using this instead of the base game in certain instances. Either way, I think this expansion is really solid and adds some fun and welcome elements to an already great game system.

Sarah: The Twilight Garden expansion of Mystic Vale adds curse tokens and cards that have negative victory point symbols for the end of the game. My play style is cautious, so when I play I try to avoid these cards entirely. In the expansion, there are a few cards that can help you mitigate the effects of the curses and negative victory points, but you must be quick to purchase mitigation cards; if that is your strategy. A player can be successful with the avoiding curses strategy, which is a strength of Twilight Garden.

This expansion does what it has set out to do: provide a different and interesting twist on the wonderful card-crafting system of Mystic Vale and presents a base game replacement option. The idea of providing an alternate basic set up is intriguing and if you have played lots of Mystic Vale, it can spice up the game somewhat. However, I would not recommend that this be the way that you introduce new players to Mystic Vale, it may overwhelm them with the extra bits and the take-that aspects. 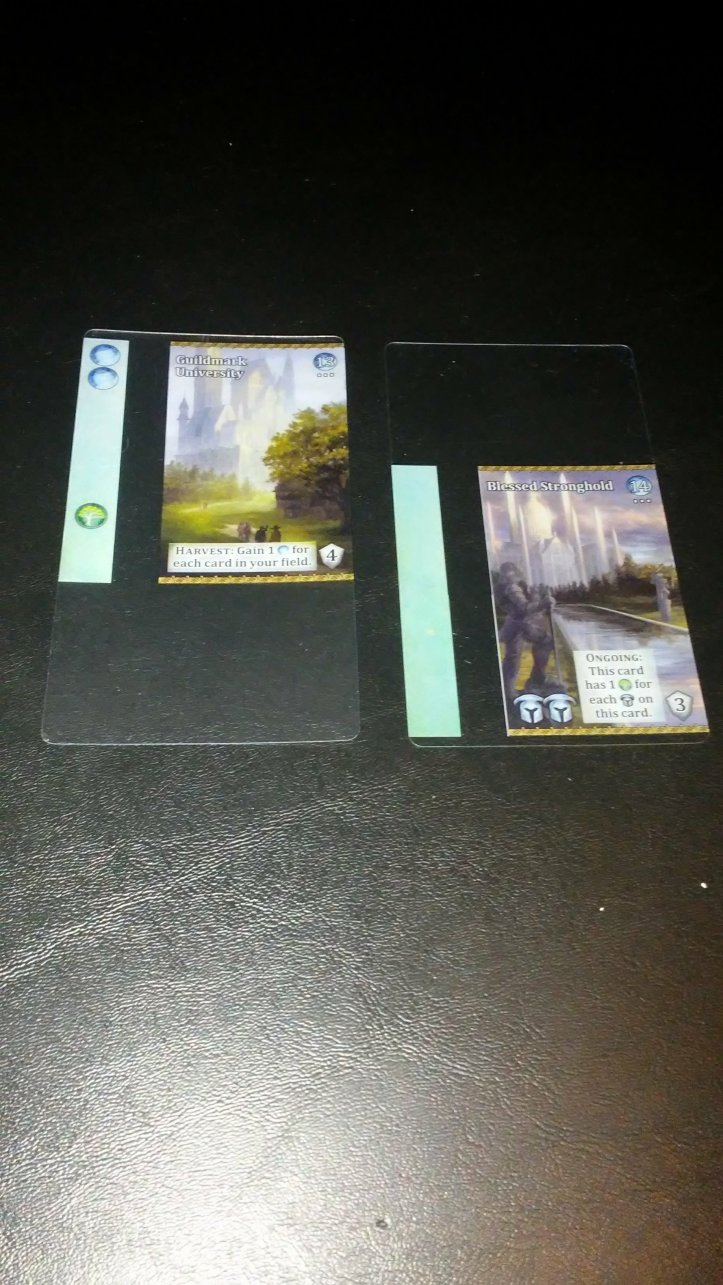 Try, Buy, Deny: We consider this a buy, but there are some caveats to it. If take-that and player interaction are not your favorite mechanisms, then this expansion might not be for you.

But, if you enjoy Mystic Vale, but would like to see more player interaction, then this expansion is right up your alley and you need to be sure to get it. If you have played a lot of Mystic Vale and want more variability, including a new base set up, Twilight Garden has you covered.

Game On!
Marti and Sarah