Disclaimer: This preview is from a reviewer’s copy of the game that was provided by Button Shy Games to Open Seat Gaming, but opinions are our own based on several plays of the game.

Description: A long time ago, in a galaxy far, far away…

Wait, no, I don’t want Disney coming after me.

Liberation is a game of backstabbery, sabotage, and domination. The powerful Dynasty has been exploiting and conquering throughout the galaxy for years and years, and a small rebellion, known as the Liberation, is looking to overthrow the Dynasty to set their galaxy free from their tyranny and evil reign. The Dynasty has gotten wind of the Liberation’s secret base and is tearing through the galaxy to try and find it…

The game starts by building the board. There are 4 double-sided cards, each with 3 or 4 cities on them, as indicated by the letters A through N. You shuffle and turn the cards every which way and put them into a 2×2 grid – that’s your board. Then, the remaining 14 cards are shuffled together. Each of them is one of the cities on the map, and have lots of information on them, including the city’s letter, the city name, and the “Mission (ability)” for the Dynasty or Liberation player, depending on who is playing the card.

The Dynasty player picks the city that they’re going to start in by laying a card face up on the table. Then, the Liberation player lays a city card face down on the table – that’s their secret base (for now). Gameplay begins.

The Dynasty player starts. The Dynasty player is going to be building a tableau of cities that they are occupying at any time, allowing them to Exploit (turn the card to its side) them and use the ability to try and suss out where the Liberation player’s secret base is. A Dynasty turn looks like this:

Start of Turn: Draw one card, or Unexploit a city (turn a card vertically so that it can be Exploited).

Action: Choose 1 of the Following:

End of Turn: Discard down to three cards. Important: The discard pile is also face down.

Start of Turn: You may draw a card.

Action: Choose 1 of the Following:

End of Turn: Discard down to three.

Every time you shuffle the deck, you rotate the deck to indicate which Act that you’re in (check out the back of these cards). If you’re in Act 3 and the Liberation’s secret base hasn’t been found, the Liberation wins.

Review: I like hidden movement/secret base style games – the whole cat and mouse feel is something that is exciting and enticing to me. I haven’t played Fury of Dracula (3rd) in a while, but I feel like that is the very best example of the genre. Button Shy and their designers are constantly shocking me, though. Who would have thought that you could get that sort of feeling into 18 cards? Seriously, from the first time that Sarah and I played, it was tense and we were on the edge of our seats until the game ended. 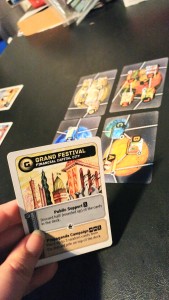 The game is simple to get in and start playing. There are some rules, as you can see from my description, but they are straightforward. As with every Button Shy game, I imagine that the rules will be easy to have nearby so that you can reference them if you can’t remember what actions you have to choose from. I played as the Dynasty most of the time, and even with all of the choices I had for my one action, I didn’t experience a lot of analysis paralysis. The copy we got contained prototype rules, so we did have a few clarifications that were necessary, but as with every Button Shy game, that’ll be cleaned up for the release!

Balance is something I always try to look at in games, and the care that they put into balancing this game is apparent. The Missions for both Dynasty and Liberation are powerful – but the Dynasty usually has to take a turn to recover afterward, and the Liberation’s abilities can’t result in a deck shuffle – only drawing cards can do that. It’s that fine balance that allows both sides to win fairly evenly – out of the games I played, the Dynasty won half, and the Liberation won half, and it was really close every single game we played.

I’ve never played Star Wars Rebellion, but from what I know of it and the playthroughs that I’ve seen, this was definitely inspired by that game, and they nailed it. You really do feel like the Rebellion and that you’re trying to hide away and not be caught. The tactics of this game are strong and, while you can start to plan out your next turn, the whole thing can be turned upside down in a moment.

Button Shy has done it again! Whether you have a small space to play games, a small amount of time to play games in, or a small budget for your games, this is the perfect way to get an asymmetric cat-and-mouse style game in 18 cards. It is definitely staying in our collection, we’re backing it to get some of the fun stretch goal extras and whatever else that they have in store.

Kickstarter Information: Liberation launches on Kickstarter on Wednesday, August 15th, and will be on there until August 25th. Like every Button Shy game, it will be $10 on Kickstarter, with $2 shipping. We will update this post with a link when the Kickstarter goes live. Here’s the link!