Disclaimer: This review is from a reviewer’s copy of the game that was provided by Deep Water Games to Open Seat Gaming, but opinions are our own based on several plays of the game.

Description: Hanamakoji takes you to the Geisha District in Kyoto, where you’re bringing items to some of the most influential Geishas (entertainers) in order to earn their favor.

You start the game by putting the 7 Geishas in between yourself and the other player. In the center of each Geisha card, you will place a favor token. You shuffle the deck, take one card out (which neither player sees) and then deal 6 cards to each player.

You each have 4 action tokens. They start with the color side up, and each player will take each of the four actions in each round, flipping the tile to the black and white side in order to indicate that you’ve already performed that action during this round. On your turn, you will draw a card, and then choose one of the four actions (they can be taken in any order): 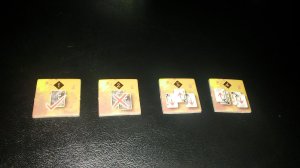 At the end of each round, your board will look like the picture below. You will flip over the card you hid away with Action 1 and then score the round. Whoever has the most cards on one side gets that Geisha’s favor, and the favor token is pushed to that player’s side of the card. If you have an even number of cards, it stays in the middle of the card, as no one has gained the Geisha’s favor. After all 7 Geishas have been scored, you see if the winning conditions have been met.

You win the game if, at the end of any round, you have the favor of 4 Geishas, or you have at least 11 charm points between any number of Geishas. If that condition has not been met, then you reset the cards, keep the favor tokens where they are on the Geisha cards, and start another round. After the next round, you score again, but if you tie on a card that was previously won by one of the players, the favor token instead stays on that player’s side of the card.

If both of those things happen at the end of a round, the player with 11+ charm points wins. An alternate rule (which Sarah and I played with) is if at the end of 3 rounds, there is no winner, the person with the most charm points at that round is the winner.

Review: I will fully admit that, when the game was released in the United States in 2016, I was hesitant due to the theme. As an American, I was ignorant to what Geishas actually were – I had always thought they were the equivalent to an American street worker and, because I knew nothing about Emperor S4 at that time, I thought that it was a game that was being racist and disrespectful to Japanese culture.

Now, I know better. Emperor S4 is a Taiwanese company, so they would know better than I, a white American that has never gone further than the Midwest, would know about Asian cultures. Geisha literally translates to “arts person” which is someone that has been trained in music, prose, acting, and other such entertainment areas. We’d call that an artist or artisan in English – and so you’re literally trying to get the attention of the high class, well-off artists that live in the arts and entertainment district in Japan. It’s no different than going to NYC and trying to win the attention of people on Broadway or at the Met.

If you want to learn more about Geishas, check out this article at I Am Aileen, where she actually chatted with a modern day Geisha and dispells tons of myths about them!

So, when we got the chance to try Hanamikoji for ourselves when Deep Water Games announced that they were bringing it back to the North American market, we were all over it. If you’ve been around OSG for any period of time, you know that Sarah and I are all about 2 player games. We love to outsmart each other and see who can get ahead with brain games like this – and it totally caught our attention and kept it the whole entire time.

First off, the art is stunning. Maisherly did an excellent job with this beautiful art and it really is a masterpiece of a game – like the other Deep Water/Emperor S4 titles on our shelves, it really stands out and shows off how amazing that Asian art done by Asian artists is. The font on everything is clear, and the game is language independent – we seriously looked at the rulebook once after our first game, and it was to remind ourselves of how ties worked.

This game does what elegant 2 player abstract games should do – the rules are incredibly simple, and I was able to teach Sarah the game in less than 5 minutes. But once you get into the meat of the game, you’re constantly thinking and adjusting your tactics in order to try and get ahead of each other. It’s a lot of tug of war, and I won the first couple of games we played, but then Sarah got the strategy down and started kicking my butt (which is usually what happens, lol).

This game is filled with constant changes and tactical energy. The art is great, the gameplay is awesome, and it’s short enough to play when waiting for a meal or if you’re just winding down for the night after a busy day. We played 3 games in less than an hour the other day – how’s that for a quick game that really gets your brain working? We love it, and it’ll be sticking around in our collection for a long time.

Buy, Try, Deny: In short, I can’t recommend this game enough. For 2 player enthusiasts like Sarah and I, you need to get your hands on it like yesterday. If you enjoy tactical, head to head 2 player games where you try to outsmart your opponent, then Hanamikoji is a definite buy for you! If you’re into 2 player games and you aren’t totally sure about the theme, aesthetic, or gameplay, then try it out!

Deep Water Games currently has preorders for Hanamikoji’s August release available on their website. Their Gen Con preorders ended July 18th, but they will have copies available at Gen Con, and the game will also be available for demos. They’ll be at booth 232!

Game On!
Marti, The Fluffy Meeple