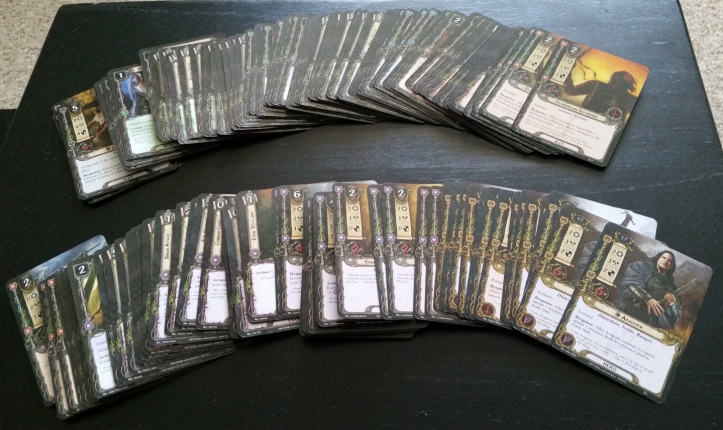 The Lord of the Rings: The Card Game is a living card game from Fantasy Flight games. Living card games are a variant of the trading or collectible card game genre with fixed distribution. This means that instead of having randomized packs of cards (like Magic, Yu-Gi-Oh!, or Star Wars Destiny) you get core sets and expansions that have a preset list of cards. When you pick up an expansion you’ll know exactly what you’re getting because all copies of that expansion are identical. Each expansion also contains enough copies of every player card so that you could put the maximum in your deck, plus new scenario cards. This makes it easier (and cheaper) to collect cards for a game you enjoy playing.

In The Lord of the Rings: TCG, each player assembles up to 3 heroes as well as a customized deck of allies, events, and attachments. Each turn, players will play cards from their hand, commit characters to questing in order to try and advance the scenario, move to new locations, defend against attacks, and attack enemies. If they can successfully advance through all scenario cards, they win! If all their heroes are defeated or their threat reaches 50, a player is eliminated; and if all players are eliminated the game is lost.

Heroes ready to begin the scenario.

Each scenario is made up of a number of quest cards that you progress through sequentially, and also has a number of encounter icons that tell you which encounter sets are shuffled together to create the encounter deck which adds cards to play every turn. Characters can commit to perform tasks, but actions like questing, defending, and attacking will exhaust the characters and they don’t ready until the end of the turn. As such, questing characters usually can’t be used to defend or attack later so you need to evaluate the staging area and use your characters as effectively as possible each turn.

I’ve only played this non-solo once or twice, so this review is based solely on my solo experiences of the game.

Playing this game solo means you’re only drawing 1 new encounter card each turn, so the threat in the staging area doesn’t increase as quickly, but is also means that you have to be able to handle everything with just the cards in your single deck. With 2 or more players you can try to specialize more, for example: have a player focus on questing and another focus on dealing with enemies, but playing solo you don’t have that kind of flexibility. It can be an interesting puzzle when deck-building. 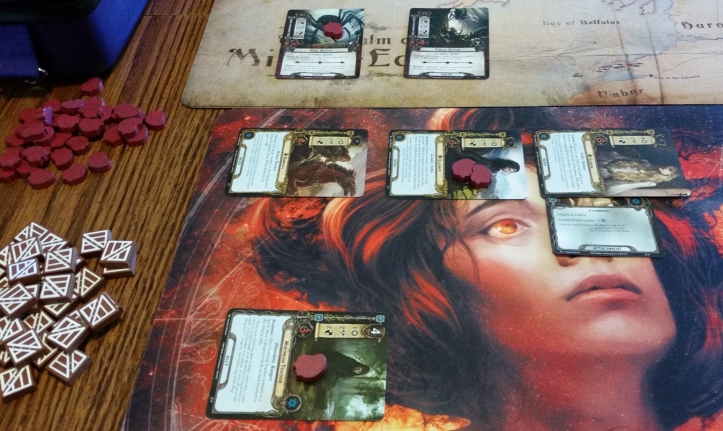 I’ve played mostly with the starter decks for each sphere of influence (factions basically) so I haven’t done much experimenting with custom decks yet. Each sphere seems to have things it’s good at (blue is good at questing, red is good at dealing with enemies, etc.) and for a solo deck you’re going to want to have at least 2 spheres accounted for in your deck. This creates an interesting dynamic because cards need to be completely paid for by resources matching their sphere. In the starter decks this isn’t an issue since all 3 of your heroes are the same sphere. However, if you have different spheres on your heroes then more expensive cards will take even longer to pay for because you’ll have to save up resources on individual heroes (and by default you only gain 1 resource per hero per turn).

So far I think playing solo has been really fun. The puzzle-y aspect for deck building makes different strategies work better or worse than when you can specialize decks playing together. Some scenarios work better or worse playing solo (the intro scenario is about 50/50 win/loss ratio with the base game decks played solo but definitely higher with a custom solo deck) but I think solo play definitely can be competitive in playing through the scenarios to see all the story.

I think the hardest part of playing solo is consistently getting what you need to get through a specific part of the game. Since your deck needs to be able to quest AND deal with enemies AND everything else, if you get a bad shuffle you can end up really screwed. If you draw all combat cards early and can’t progress the quest reliably, or if you’re drawing lots of enemies from the encounter deck and have mostly questing cards in your hand, you can end up getting overwhelmed by one thing or the other and lose. You can try to build your deck to minimize this, but there will still be times it doesn’t work and the scenario ends uncompleted. Those times I usually just reshuffle everything and try again!

Have you played LotR LCG? Is there a player count (1 to 4) that you prefer playing at? BGG suggests playing at 2 so I might try that again when my sister visits later this month (or try double-handing it sometime in the future). Let me know your thoughts, opinions, ideas, or comments here or on social media!