Fire has engulfed a home (or a plethora of other locations with expansion content) and it’s up to your team of firefighters to save the people (or pets) trapped inside in this cooperative fire-fighting game. Move around the board, check points of interest, beat back the inferno, but beware: the fire spreads at the end of every turn.

Initial explosions rock the building you choose to play on for the game (which is a single-level home in the base game but can expand to 2 stories, an airport, a subway, and more in expansions) and the fire is already raging by the time your fire fighters arrive. Strategically place yourselves and the fire truck and ambulance where they’re needed most and head in.

Each player is represented by a figure (either a generic one in the starter game or a specific role in the advanced game) that can move around the board. Each turn, you get 4 action points (AP) to spend on various actions like moving, carrying people, extinguishing fires, or chopping down walls/doors (some roles get more or less AP, or even bonus AP for special actions). After you spend your actions, or bank them for a future turn, the fire advances and is likely to spread, or even cause an explosion or shockwave.

Scattered around the board are points of interest. They are secret until you get close: some are false alarms that waste valuable time but most are people in grave danger! The building is done for and your primary goal is to save 7 of them. However, they are injured and you have to carry them out which slows you down. If too many die or the building collapses, you lose the game.

Scott’s thoughts: I’m a huge fan of cooperative games, and I backed this during the Tragic Events Kickstarter for the “everything” pledge with all expansions. We’ve only played the base map so far (as it took a few attempts to actually win on advanced mode) but already I like this game and I’m incredibly excited for everything yet to come!

Flash Point is one of those rare cooperative games that keeps you positive right until the end saving the people but also keeps you on edge and worried at the same time (but in a good way). Dice throwing being the main mechanic for spreading the fire, it can really be up to fate whether you’re safe or whether everything goes up in smoke (hah!), but it’s still an enjoyable experience even if the dice just constantly don’t go your way. If you fail, just set it up and try again!

Sarah’s thoughts: Flash Point is an excellent, action packed, cooperative game. You are on the edge of your seat from the get go because of how the fire can spread very quickly. The pressure definitely ratchets up as the game goes on. I’m not always a fan of lots stress or pressure in games, but it fits in and it adds to overall thematic feeling.

Choosing roles that work well together is an important part of the game. In one of our games, we played with both the rescue dog and the paramedic and we didn’t end up with enough extinguishing power to be able to work through the house effectively.

The shear amount of content available for this game is amazing. All the map boards are double sided.  I definitely prefer the event deck to the hot spots. The card art is very good and, overall, Flash Point has an excellent production value.

Marti’s thoughts: Wow. First time out of the gate, this game delivered. While I was not super enthused about the hot spots from the original release (it is, in short, too fiddly), when we switched to the event deck I started to fall in love with this game.

The tactical changes that come with every person’s turn makes the game super intense and thematic. Oh, the fire has engulfed the kitchen? Leave it for now. Shoot, an explosion knocked out a wall? Gotta fix it! Your choices are important and you have to talk out every single one, making it hard to Alpha-Game this title. And that’s something important for me when it comes to Cooperative games of any sort.

Other than the original hot spots being fiddly, I have very few complaints about this game. The components are decent quality, the miniatures are fairly easy to identify, and I haven’t had a hard time reading any of the text that is in the game. The fire spreading mechanism can be a little confusing, but once we took out the hotspot mechanism, it made it a little easier to understand and do.

I cannot wait to try extra maps to up the challenge and tactical decisions. This is well on its way to becoming one of my absolute favorite cooperative games.

Also, the dog. Such a good boy (fun to play, but need higher player counts for him to be effective). 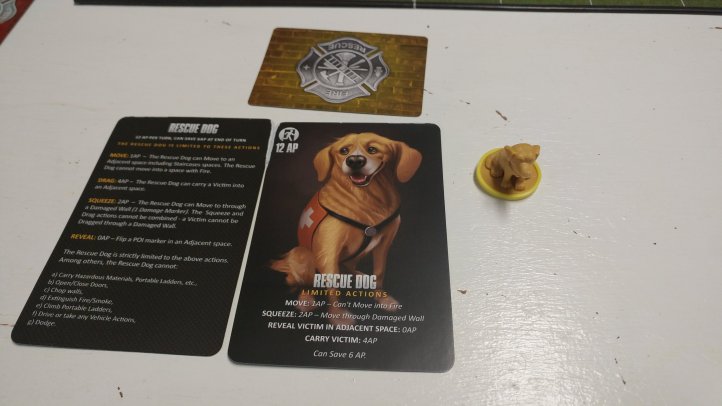 Conclusion: Flash Point Fire Rescue is a game that is engaging, thematic, and is definitely a great twist on cooperative mechanisms. The variety of boards, roles, and mechanisms help to keep this game fresh and keeps you on the edge of your seat for the entire time that you’re playing. The mechanisms are also approachable enough that almost anyone could learn how to play the basic game with ease, making it a fantastic family game. If you like cooperative games, Flash Point Fire Rescue is definitely worth the investment.

Game on!
The Meeples of OSG