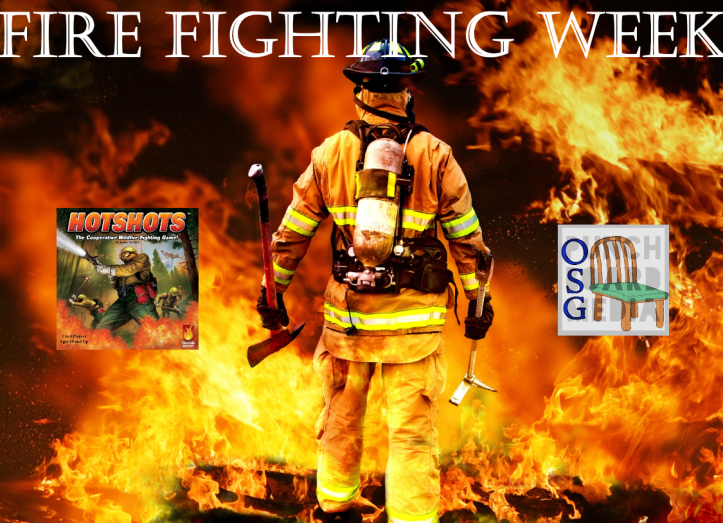 This Friday, May 4th, is International Firefighters’ Day. We at OSG are incredibly grateful for the work and service of brave, fire-fighting men and women everywhere. In celebration, we are doing Fire Fighting Week here on the blog starting with a multiplayer review of Hotshots today!

A fire has broken out in a woodsy area and you with up to 3 of your fellow firefighters have to control the blaze as wind and volatile areas threaten to make the whole forest go up in flames. Hotshots is a cooperative, push your luck, dice-rolling game where you have to eliminate all fire before the fire overruns too many areas.

The board is a randomized grid of hexes containing helpful bases and vehicles, houses and camps on fire, a lake that provides bonuses to adjacent tiles, and even hazards like dry grass and a propane tank that explodes when it scorches. Tiles scorch when they have fire on them equal to their scorch limit (which ranges from 1 to 5 depending on the tile). If enough tiles scorch (8 in the standard setup) or if the base camp tile scorches, the players lose. Eliminate all fire to win.

There are 4 different crew cards that give special abilities to that firefighter, but if their specific tile scorches they lose that ability for the rest of the game. Each turn you have 2 movement points to traverse the grid of tiles and get closer to problem areas.

Fighting fire, and gaining potential assistance tokens like firebreaks or one-time use boosts, is done by rolling the 6 dice, each of which has the same 6 different faces. Each hex has a combination of 6 symbols that you are trying to match. Only matches of 3 or more symbols get you any rewards, but as long as you match at least one die each roll you can keep rolling.

If at any point you don’t roll a matching symbol you cause a blowup which adds fire to your tile, getting it closer to scorching. You can alleviate blowups with support either from being adjacent to the lake or from having at least 1 other firefighter on the same tile as you. Each support cancels out 1 blowup and supports stack for multiple attempts at rerolls. Rewards are better the more symbols you match.

After you’re done rolling you draw a card from the Fire Deck which might add fire to specific tiles, or cause fire to spread with the blowing of the wind. Firebreaks prevent spreading from light winds, but heavy winds can jump them and spread fire anyway. Play continues until either the firefighters are successful or the fire spreads out of control. 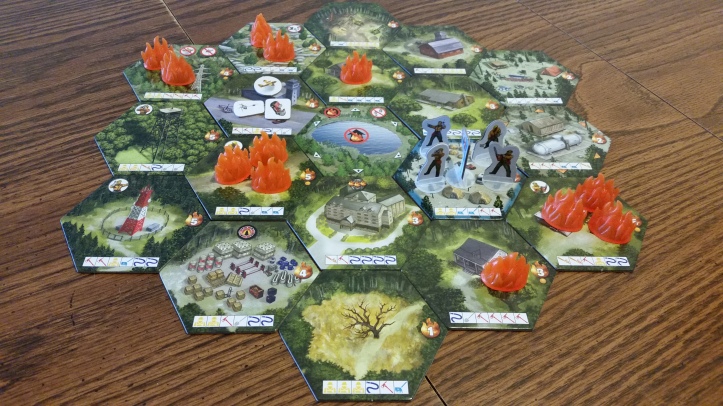 Scott’s thoughts: This game with the “standard” or default setup is HARD, like REALLY HARD. It’s a really enjoyable game if you like push-your-luck, but boy is it difficult. It took until our third game, playing with almost all of the “less difficult” modifiers, before we actually won. Now I like Pandemic so I like hard games, but it honestly felt like halfway through first 2 games that we had no hope of winning, and that can be frustrating.

The gameplay itself feels solid to me, though. Marti is usually the push-your-luck fan, but I enjoy this game. It helps that it’s cooperative, so if you really need to push through a tile near scorching you can group up with someone so they can provide support. My biggest gripe besides the starting difficulty is that there are only 4 different crew in the game, so there isn’t a lot of difference you can have with those. Hopefully, they’ll add more crew if they do an expansion for the game.

Sarah’s thoughts: Hotshots is a wonderful, cooperative, push your luck game. You can feel the tension ratchet up as you lose more and more hex tiles and as you get close to losing your most strategic tiles. The designs on the custom dice are excellent, even though the colors can be hard to distinguish. Different roles may increase replayability, but the differing levels of difficulty already build some of that in. The plastic flame pieces are excellent and evocative. When you get multiple flames on one tile, you can really tell that the particular tile is in trouble, just from glancing at the tile and the flame pieces. I greatly enjoyed the experience that this game provided.

I’m someone who is attracted by theme, but I don’t necessary need a “thematic” game in order to like it. Hotshots is very thematic – while I can’t imagine what a real firefighter goes through when dealing with a forest fire, I imagine that the feeling you have throughout a game of Hotshots simulates that feeling quite well.

As Scott said, the difficulty of the game at the normal level was almost tuned to be too difficult. My biggest problem, however, was the dice. These beautiful custom dice are great to roll – but as someone who has some problems distinguishing between colors with similar shades, I struggled to see what faces I’d rolled, or what faces I needed to roll. I wish the tiles had larger symbols and that the colors were more distinct.

Otherwise, I really enjoy what Hotshots brings to the table. It’s a fun, intense game that requires you to think on your feet and make some often difficult decisions. I would definitely like to get it to the table some more to see if we can raise the difficulty as time goes on. It’s a fun and exciting game that requires cooperation and luck, and that’s right up my alley of games I enjoy.

A neat game in a small package, Hotshots will very likely make it back to the table here at OSG. Have you played Hotshots? Feel free to leave your thoughts in the comments here or on social media!

Game on!
The Meeples of OSG