Welcome to Classic Callback, where Marti, @fluffymeeple, checks out some of the great games of the past so that new gamers can get a fresh look at what we think of them! This month, we’re going to be giant monsters overthrowing Japan in the Yahtzee-mechanism based King of Tokyo! 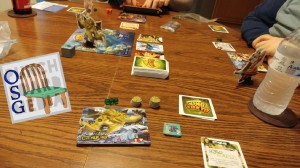 The Game: King of Tokyo is a game where you play giant robots, monsters, and aliens that are trying to rip apart Tokyo – and each other! The game is a beat-em-up game that revolves around the Yahtzee mechanism (roll once, keep what dice you want to keep, re-roll the rest of your dice up to two more times to get sets).

There are 6 different faces on each die – 1, 2, 3, energy (lightning bolt), healing (hearts), and attack (claws). Sets of 3 of the same number grant you that many victory points. Healing doesn’t work inside of Tokyo and attack lets you hit the people outside of Tokyo/Tokyo Bay (if you control it) or the creature in Tokyo/Tokyo Bay (if you are outside of it). Energy gives you these little green cubes that you can collect in order to buy any of the three cards that are in the marketplace – these cards grant your monsters powers that can give them a leg up in the game!

You win by either being the last monster standing, or when you hit 20 victory points.

Why It’s Worth a Classic Callback:

It Causes a Ton of Laughter. This past weekend was my birthday weekend, and I actually really had an itch to play King of Tokyo. So, we took it to Scott’s – and laughed a whole heck of a lot. And we took it to a friend’s family’s house and played with 8 players (hence my “6” up top – if you’ve got the characters, you can play it – there’s just a bit of down time). Guess what? Tons of laughter and “oh man!” and stand up moments. It really gets everyone involved, even if they weren’t super enthusiastic about it at first glance.

The Yahtzee Mechanism is Familiar and Easy to Teach. Almost everyone has played Yahtzee at least once in their lives, and most people understand how the mechanism behind the game works. While it’s definitely a lot more than “glorified Yahtzee,” it does make that basic game easy to teach – you can get people going with the game quickly and then guide them with the extra stuff. Within 2 or 3 rounds, guidance is no longer needed and everyone is having a great time.

Iello is Still Supporting the Game. Some games (Dominion, lol) go too far when it comes to keeping up with expansions and whatnot. Iello, I believe, is doing it right. They just reprinted King of Tokyo in 2016 with some updated art and some character changes. They added the Power Up expansion (which is for more experienced players, but we love adding it in) shortly after the initial 2011 printing, and they add new characters from time to time, which add some twists on the game. I’m particularly fond of Cthulhu, which was the first “character pack” after the reprint.

They also did a great job with it and King of New York – you can actually use the standees from King of New York in King of Tokyo and vice versa, making for a ton of variety of who you can play. While it doesn’t make much of a difference what character you play (unless you’re playing with Power Up), it’s still great to have tons of characters to choose from.

Have you tried King of Tokyo or it’s more “gamerly” version, King of New York? How do you like it? What sorts of things do you like about this series of games?