A Solitary Unboxing – The City of Kings (Deluxe) 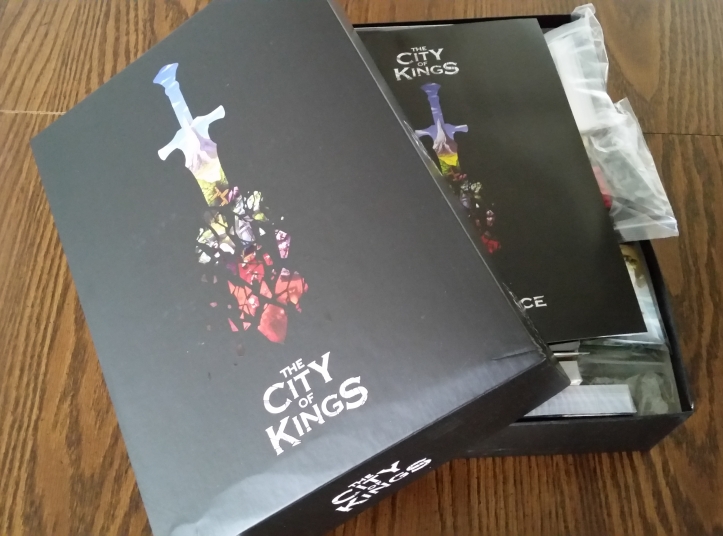 Welcome to another unboxing! Today I’ll be showing off The City of Kings (Deluxe Edition).

NOTE: Normally I open/punch/unwrap things more for these unboxings, but the box for this game arrived damaged so I’ve kept most things as they were to make transitioning it to the new box easier once that arrives. Shout out to Frank with The City of Games for getting a replacement request put through right away!

This is everything that comes packed inside the box. There’s so much! Specifics below as always.

We have the usual rulebook plus a quick reference guide, and on top of those is an Achievements sheet that it seems you’re supposed to write dates on when you complete various chapters and stories. 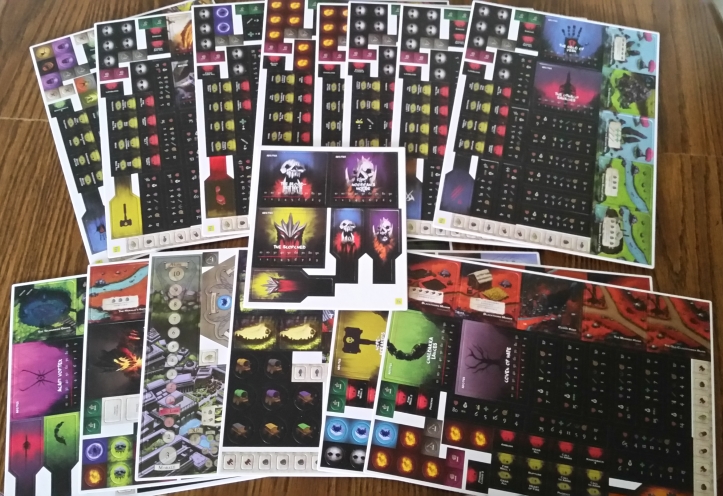 SO MANY PUNCHBOARDS! There are 14 of the larger ones, plus that smaller one in the middle. The items on these range from map tiles to faction boards and standees plus a bunch more.

These are the “quick set-up trays” that were unlocked during the project. They hold bits and bobs to make getting the game ready (as well as putting it away) easier. I love that these were included right off the bat. Won’t have to get an insert for this game!

Here we have the character sheets/mats: one side has full art pieces with a little backstory and the other side has the actual gameplay portions. The plastic frames are the “anti-knock” sheets that lay on top of the character sheets (see the bottom left of the pic) to hold the cards, cubes/trackers, et al in place when you’re playing. Such a neat idea!

So many cards. The tarot-sized ones near the bottom are the story/scenario cards that give you map layouts and setup information. There are regular-sized cards for items and some other things, some mini cards (which I believe go on the character sheets), as well as some square ones.

Here we have the wood bits. I think some of these are exclusive to the deluxe edition, and I’m glad I backed for that level because they are awesome! I love the little axes, fish, wood, etc. The 4 bags at the top are, I believe, the player pieces.

And lastly we have the miscellaneous bits. Dice, bags for holding the modifier tokens, standee bases, a spinner (haven’t found what that’s for yet, mystery!), and a truckload of empty bags for putting things in after you open/punch them. I love when games include those, it makes organizing things SO much easier.

I am SO EXCITED to have gotten this game, been anxious for it since the KS project. The replacement box should hopefully arrive soon and then I can finish punching everything, and then soon after get it to the table. I can’t wait!