Sarah and Marti hit the ground running when it came to going to conventions – our first two were Origins and PAX Unplugged. This year, all three of us actually had the opportunity to go to PrezCon, which is our local convention held in Charlottesville, Virginia. Today’s post is focused on how we enjoyed our first experience at a smaller, local convention. 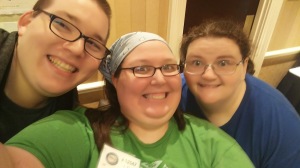 Marti: I have lots of thoughts on this fun day, and here is just a quick overview of my opinions on the convention.

Scott: I don’t have as many specifics as Marti does, but for my first ever tabletop game convention it was a really good time. I’m glad the next one we’re planning to attend we’ll be there more than just 1 day, because I am looking forward to multiple days of gaming and meeting people and generally hanging out and having fun!

Prezcon was rather small (at least it seemed to me, from what I’ve heard of Origins and similar huge ones) but it never seemed lacking. The open gaming room was packed most of the day Saturday, and even well into the evening (there were still a lot of people there playing games when we left around 9pm). They had a moderate library with a lot of the games Marti and Sarah had written down that they wanted to try. I didn’t really know what to think about or look for so I just played games they chose and it was a really good time.

We got to sit in on a playtest for Fate of the Elder Gods which was super fun. I had never played before but that one game made me immediately add it to my wishlist and hopefully someone from OSG will be acquiring it this year, haha. The expansion adds a bit of asymmetrical play and expands the solo mode so I’m very much looking forward to it.

Overall, it was a really good visit to a convention I hope to continue attending in future years and I’m glad my first convention experience was at a smaller one as it’ll help with some of the larger ones yet to come later this year.

Sarah: Our day at PrezCon was full of board gaming fun. The venue was great for the convention. The chairs were ultra comfy and there were nice linen tablecloths. The gaming space had a good feeling overall. I agree with Marti about the cost, but I understand that the nice venue is most likely very pricey. The library was skewed towards wargames, older titles, and heavier games.

I had scoped out their game library listing on their website and had a list of several games to try. We were able to try a handful of them. I feel like most people brought the games with them. Walking around and observing what others were playing ranged from Gaia Project, Rising Sun, and Cthulhu Wars to Dice Forge, Queendomino, and Splendor. My highlight experience of the convention was meeting the Dice Hate Me games crew and getting to playtest the upcoming Agents of Arkham expansion to Fate of the Elder Gods. Playing the game with Chris and being taught the expansion by Darrell was just awesome! In addition, getting tips on strategies for playing as the investigators was incredibly neat. Loved getting to spend some time with such a great group of people! Overall it was a fun, local convention that I look forward to returning to.

So, we loved it! We had a great time at PrezCon and can, hopefully, get to it for a much longer period of time next year. Our next convention is Unpub 8 up near Baltimore – hope to catch some of you there!