Disclaimer: This preview is from a copy of the published game that was provided by Nice Game Shop (distributor of Korea Boardgames) to Open Seat Gaming, but opinions are our own based on several plays of the game. 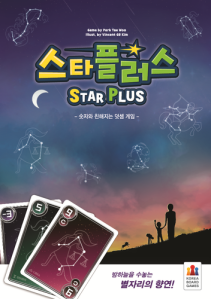 Description: Star Plus is a quick little filler game where you need to have your wits about you as you think through what you’re doing and work out the math of it. You’re trying to get rid of the cards in your hand by putting them into a pile in front of you – but it’s not that easy! As you go around the table, you will have to continue counting upwards from 1 to 12 (so 1st player plays 1, 2nd player plays 2, and so on).

There’s a twist though. The highest number you can have is a 9 – so you have to use combinations of cards to equal the number that you’re on. There are even -1’s, -2’s, and -3’s in the deck! Using the 7’s and 8’s lets you steal cards from other players piles; 9’s reverse the order of play. There are also skips in the deck, but it means that you’re skipping your own turn.

If you can’t build the number you’re supposed to build, then you have to draw 2 cards and the next person has to build the number you were supposed to build. If anyone ever uses 3 or more cards to build a number, it makes a “black hole”, and those who play after them have to also use 3 or more cards to build their next numbers. If you can’t do so, you have to draw 4 cards, the black hole disappears, and then play resumes as usual.

The game ends when the draw pile runs out or when one person runs out of cards in their hand. Then, the cards in your specific pile are worth one point each; cards left in your hand are worth -1 points, and if your hand is empty, you get a 5 point bonus. Highest score wins!

Review: I have a lot of fond memories of Uno from when I was a kid, and Star Plus piqued my interest because I will try anything that has an astronomy theme of any sort. This one uses the zodiac, and while it’s a pasted on theme, I appreciated their use of it in this context. The art is very nice and the card quality is decent.

The game play is from 2 to 6 players and, while it’s alright at 2, it really shines in the higher player counts. Even at 3 players, the game felt a lot more dynamic than you may expect it would. And like I’ve said, it really feels like a better version of Uno. It’s quicker, it’s thinkier, and it’s a lot of fun!

I haven’t gotten the opportunity to try this out with kids yet, but I feel like it would do really well in that context. The adding and subtracting of numbers is something that can help with math skills, and while I wouldn’t play it with anyone younger than 8 (the math skills may get a little difficult), it is still a great time.

Buy, Try, Deny: Definitely try this one out, especially if you know someone that has a copy. It’s a lot of fun and a great little filler or starter game for a game night. It is in limited supply in the United States, so you may have to buy it if you really want to get it to the table. It’s available at Nice Game Shop for 9.99 euros (about $12.50) and may eventually get further distribution.