Disclaimer: This preview is from a copy of the published game that was provided by Portal Games to Open Seat Gaming, but opinions are our own based on several plays of the game.

Game Play Overview: The basic premise of Alien Artifacts is building up your empire. There are 3 main types of cards: planets, ships, and technologies. Each helps you in different ways (reducing the cost of cards, allowing you to attack players or the alien system, or even generating resources). At the beginning of the game, each player is given a faction (either randomly or by choice) and your faction dictates what cards you start with and how you’ll score at the end, thus giving you a goal to aim for.

Each turn consists of the turn player performing 1 action and then drawing to refill their hand. As the game goes on there will be additional, optional tasks that don’t require using your action, and you can do those before or after your 1 action for the turn. The actions you can do range from buying cards (that go to the left of your faction board to be built later) to adding resources to cards-in-progress (or building them outright if you can afford it) to trading resources for money, which are referred to as credits.

Credits are spent primarily to buy cards, which by default requires you to purchase whichever card is face-up on the deck (each card type has its own deck). You can spend additional money to look at additional cards and select the 1 you want. To build/explore the cards you’ve bought requires resources which are found on the cards in your hand. Each card has 2 sides and each side has 1-3 of a resource. The resources coincide directly to the card types and there is an additional, “wild” resource that can be used for any card. 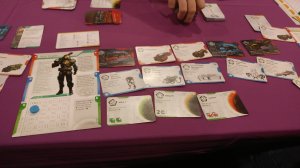 If you have operational ships, you can attack players or the alien system. The benefit of attacking players is that you can put blockade tokens on their cards which make them harder to use. Attacking the alien system, though, can yield you an alien artifact, which are the most powerful cards in the game. They have varying effects- some are used immediately and others help you score at the end-but all are incredibly powerful when used at the right moment.

After a number of rounds based on the number of players, the end game is triggered. Once everyone has the same number of turns you enter final scoring. Get the most victory points and you win!

Scott’s Thoughts: I really enjoy this game. Every main card in the game has multiple uses, between the differing resources and the combat numbers on the resource cards to the operational/logistics conundrum every time you build a card, and you have a lot of things you can do (but not so many that I felt paralyzed by indecision very often). Trying to decide whether to take the ongoing bonus for planets or the resource cards for future building can be hard to figure out but feels great when you get a good combo or your engine finally starts chugging along.

I like that the factions start with and specialize in different things meaning you can have a completely different play experience if you choose a different one next time. I was disappointed that there are only a few different alien systems available at the start; because if you’re playing with friends and want to be non-aggressive, then that’s the only thing you can attack and the same ones coming up repeatedly gets old rather quickly. I do like that you can choose not to attack players and not be hindered in any way (since any ship can attack any target) and there are definitely multiple paths to victory.

I also feel like there’s a specific path to victory that is really easy to get going and very powerful that could have used a bit more balancing, but there’s an expansion coming out next year already so hopefully that has material to fix this imbalance (and hopefully the alien systems drought). Either way, I highly recommend Alien Artifacts!

Marti’s Thoughts: Let me preface this by saying that I do like the game. I know, it’s always scary to hear a reviewer start with that sort of statement. I actually really like the game – but, unfortunately, there are some issues that I can’t overlook. Let’s go with pros and cons since that’s how my brain works.

Here’s the big question – it promises a 4x game in an hour. Does it deliver? Kind of. I don’t feel like I’m going out and exploring things and conquering them. I’m using cards – to get more cards – to make things happen – to get more cards – to get points. I definitely feel the “expand” and “exploit” – but not so much the “exterminate” and “explore.” But, all that being said, I do feel like it’s a much heavier game in a much lighter package – and that’s something that it does succeed at and that I really appreciate. On the “Try, Buy, Deny” scale, I call this a try.

Sarah’s Thoughts: I thoroughly enjoy Alien Artifacts. I’ve been looking forward to this game ever since I heard about it. First off, if you have experienced players you can definitely play this game in around an hour, give or take. Most of everything you need to know in order to play the game is located on the double-sided player aid, or on the back page of the rulebook. This is definitely very helpful in terms of coming to understand the game and allowing you to understand what is going on while playing it.

The component quality of the cards and mats is very good. The card art for the ships is very detailed; all the ships have their name written on the ship on both sides of the card. We’ve played our copies a few times and we aren’t seeing any wear and tear yet, so I’m hoping that bodes well for the lifespan of the game.

I enjoy the engine building and different ways you can play the game. Like Marti, I do wish there were more Alien Systems that you could attack. I also wish that the Alien Artifacts were useful in any circumstance – there have definitely been times where I went through a lot of effort to obtain an artifact, only for it to be totally useless based on my strategy or “coming too late in the game.” That’s to be expected from a “luck of the draw” concept, but sometimes it really stinks.

Unlike Marti, I do feel like the game does what it sets out to do; be a 4X game that plays in around an hour. I think that it all depends on how you define the 4x’s and what you are looking for in a 4X game in the first place. In a nutshell, Alien Artifacts is a fun 4X Engine & Tableau Building game that in terms of game time and difficulty hits a sweet spot that I haven’t been able to find in many other games.

Have you gotten to try Alien Artifacts yet? What did you think about it? Are you ready to get it back to the table? Are you thinking about getting it? Leave some thoughts in the comments or on social media!

Game On!
Marti, Sarah, and Scott