Welcome to another unboxing! Today I’m showing everything in the Kickstarter (Enlightened Exile pledge level) edition of Aeon’s End. This one included the 2 expansions, most of which are the content unlocked via stretch goals.

I also pledged for the Accessory Pack and 1st Edition Aeon’s End Update Pack, so I’ll be showing those as well (in separate sections).

This is everything in the box, there’s A LOT! As usual, I’ll go into specifics below.

Here we see the rulebook and first game setup sheet as well as the Gravehold and nemesis life trackers. In addition, they include the expansion boxes in case you want to keep those for novelty.

Here we have the punchout bits! The left sheet is for the main game and the smaller ones are from expansion nemeses. They also give you baggies to put everything in. Sorry it’s blurry, didn’t realize that until I was putting this article together and by then I had already punched and sorted everything.

Here we have the regular and special breaches (some mages replace the default breaches) as well as the card dividers that help organize the cards in the box.

Here we have the mage and nemesis mats. If you’re familiar with the 1st Edition of the original Aeon’s End you’ll notice some striking differences with these mats. These are the redesign that they did for both War Eternal as well as the 2nd Edition of Aeon’s End original. If you haven’t seen the 1st Edition versions, check out the Update Pack section below where I give side-by-side comparisons.

And here we have the cards. SO MANY CARDS! I think there are over 250 between the base cards and expansion additions. So, needless to say, there’s a LOT of replayability in War Eternal, added to all the replayability from the base game (not to mention if you combine them).

So the accessory pack is an optional addition to Aeon’s End. What it does is give you some bits (shown below) as well as additional Crystals and Sparks (the non-unique starting cards). What are they useful for you may ask? Well, with these additional cards you can make a separate deck for each mage from both Aeon’s End and War Eternal, as well as all expansions, ALL AT ONCE!

This means rather than having to build the decks during setup every time you can just pick your mage and grab their pre-built deck with no hassle. Not mandatory by any means (as the card backs didn’t change so you can use 1st and 2nd Edition cards together successfully) but definitely a quality of life improvement. And with the other bits it’s honestly worth it in my opinion. 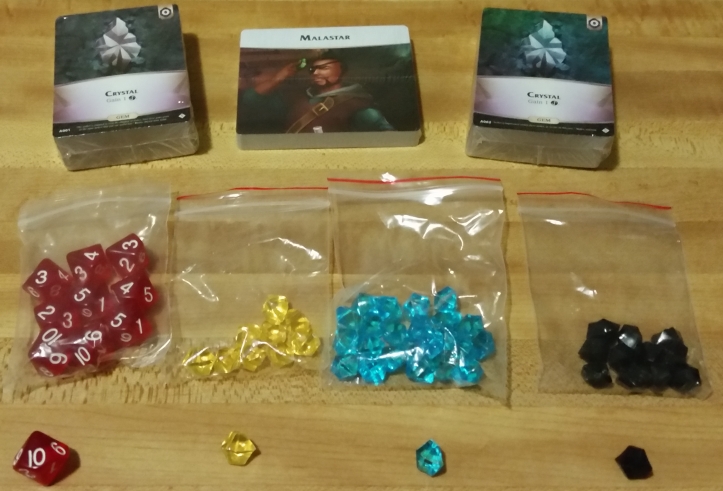 So here’s everything that comes in the Accessory Pack. The aforementioned cards are alongside dividers for each mage so you can separate the decks you’re able to build now. There are also spin-down d10 dice (spin-down meaning they have sequential numbers adjacent for keeping track of life) and yellow, blue, and black plastic gems for keeping track of nemesis powers, mage charges, and nemesis tokens. 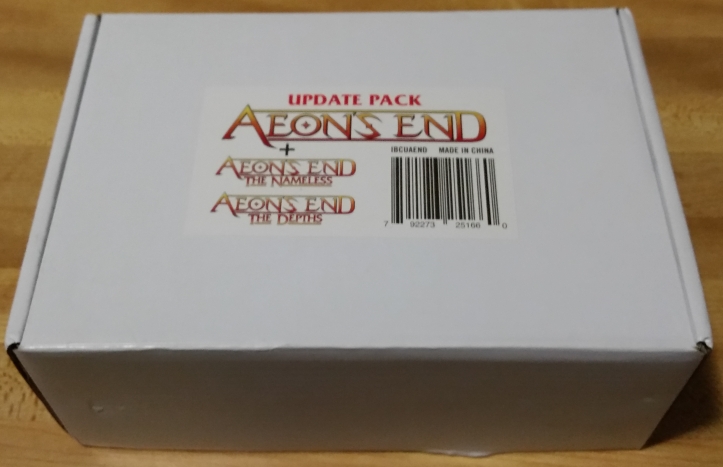 So here we have the unassuming box that contains the Update Pack for the 1st Edition of Aeon’s End and its 2 expansions. This updates your cards and mage mats to the new design as well as updating the nemeses as needed.

These are all the card stacks provided in the box. You’ll note they’re in the same configuration as if you had bought the 2nd Edition of Aeon’s End (as you can see by the Stop A, B, and C decks that you use for the recommended first game setup).

Here are the updated nemesis and mage mats. I was a bit disappointed to see that the nemesis mats didn’t get the new, visual update/frame, but they are indeed updated (if you look at Blight Lord, second nemesis from the left, the card picture on his mat is the updated card frame). The mage mats did get the visual upgrade and I’m really a fan of this new look.

I wanted to show a comparison between the 1st and 2nd Editions of the cards and mats. Each has its own picture below.

On the right is each card’s 1st Edition version and the left is each 2nd Edition. I really like the upgrade to the cards. The black borders on the old ones seemed like a waste of space and the art frame (for the cards that have art) is bigger on the new versions to better show off the lovely art. If you look closely you’ll also notice that the new nemesis cards have the associated nemesis’ silhouette in the background to help you even more easily distinguish who they go with (and it also gives it a thematic feel, I think).

Here are the upgraded nemesis and mage mats, old on the right and new on the left as before. As mentioned above, I was hoping the nemesis mats would get the new frame but these didn’t. They did get the rounded corners of the new mats, though, which is definitely an improvement. The mage mats are definitely an improvement. Again it shows off the art a lot better (the zoomed out/full art is available with the flavor text/story on the back of each mat) and in general they seem to flow a lot better.

Well there you have it. I really like the original Aeon’s End, though I don’t get to play it often. War Eternal and its associated content seem to add just as much as the original game did (it’s a stand-alone expansion, so that makes sense) and I look forward to getting it to the table!