Welcome again to another insert review! After the smashing success of the Broken Token insert for Legendary I tried last month, I decided to give another one a try. This time I decided to go for a different company, Meeple Realty, as they had an awesome-looking insert for a game I love that has a LOT of components: Anachrony. Turns out I was getting myself into one heck of a project, and here’s my journey.

NOTE: The game/components shown are the Kickstarter/deluxe version of the game that includes the miniatures as well as the 2 expansion modules. 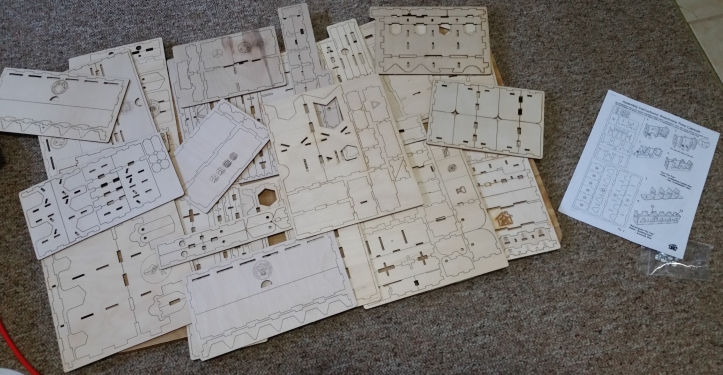 All the sheets of parts/pieces! There were 24 sheets in total (though some were smaller/skinnier than others). That’s a lot of wood! The directions packet had 12 pages as well, though the last page was putting everything in the box (as opposed to assembling as part). But that’s still a ton of directions. They were overall easy to follow. 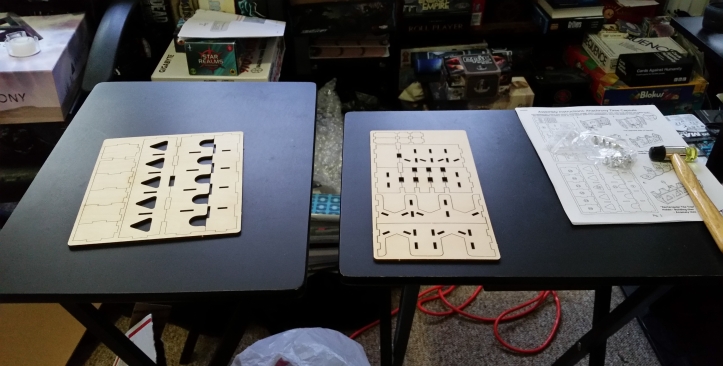 My assembly setup. I decided against using my larger board on the floor as my work surface once I saw how many pieces this thing had. My back would not have been happy sitting on the floor bending over the project for as long as it took to get this all put together, haha. I was SO glad to have my hobby hammer (which I also got from Meeple Realty) as some of the parts were small enough that you had to use the hammer to get them in because there wasn’t enough surface area to push them in yourself. Plus it just generally helped make sure the connections were all firm.

First piece done! There would be many more to follow. This was an odd one to start with because those little tabs inside (that hold the tiles) were super small and it made me second guess the whole thing if the parts were always gonna be this small. Thankfully, this was one of the only pieces with parts that tiny and most of the other parts assembled much more smoothly.

A partway-into-the-project view of my prep/complete area. The stacks of sheets I prepared ahead of time by paging through the directions and seeing which sheets were needed for which step. This way I could just grab them from the top as I got to each new page.

Halfway done! I marked halfway going by page numbers (so this would have been after page 6, I think, I forget if I split it at page 5 or 6). It just so happened that the pieces completed at that point fit nicely onto half my board as well.

Fast forward from the previous picture to being all done! The latter half had several parts that you repeated multiple times (the player faction trays and the miniature trays) so it seemed to go more quickly than the first half. Total time to assemble everything you see above was roughly 5 hours. FIVE HOURS! A long time, but totally worth it.

At this point I started moving all the bits and bobs into their new, wooden containers.

These are the player faction trays in various states of packing. Harmony in the top left is fully packed. Salvation in the bottom left has just the board removed (which acts as sort of a cover to keep everything underneath in place). Progress in the top right has the player aid and character cards removed. Dominance in the bottom right has the standee removed so you can see all the bits and how they fit underneath.

The miniature holders. Some of them I wish were a bit tighter (the minis slide around a bit) but when they’re all stacked in the box (which is where it really matters if they’re secure) they fit nicely together. 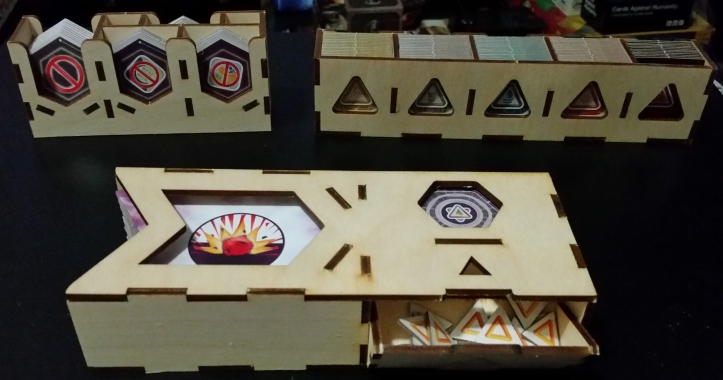 Collapsing tiles in the top right, buildings and anomalies in the top right, and the bottom has the timeline tiles (including the blank/editable ones), the superprojects, and in a sweet little drawer thing the paradox tokens. It folds shut to keep them all in there.

Top container (that has a sliding lid) holds the victory point tokens and the power cores. Bottom left is the “extras” container for the resource bits. The base version of the games comes with cardboard chits for the resources, but one of the extra packs has plastic cubes (think Pandemic) to replace them so this container holds whichever set you aren’t using for gameplay. I like the cubes so I have the cardboard chits in this container as seen above. The last piece on the bottom right holds all the dice as well as the plastic stands for the standees on the right side, and the left holds the non-miniatures pieces for the guardians add-on module and the chronobot bits for the solo mode. 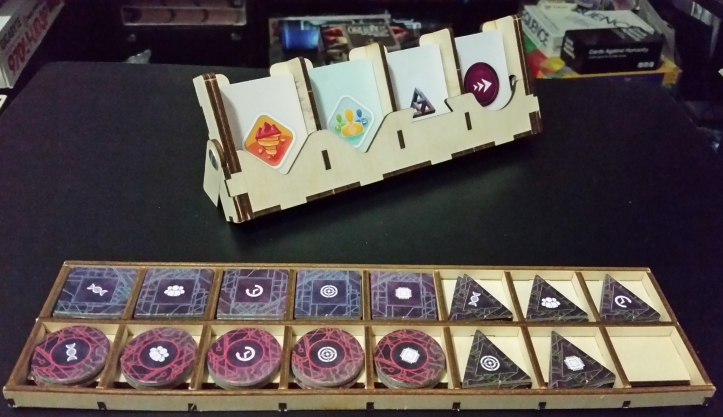 The top piece is a mini card tray (that has little feet to stand up!) which holds the mine, worker, victory condition, and starting resource cards. The bottom piece is a tray that holds the breakthroughs. This tray is really warped (it’s curved upwards at the edges so it doesn’t sit flat) but I’m hoping it being on the top of the box when it’s packed will help force it into a more normal position, and even the way it is currently it holds the breakthroughs just fine with no sliding.

These are the bits containers! The left one holds the workers in 2 layers and the right one similarly holds the resource cubes (or cardboard chits) in 2 layers.

And here are the above containers all packed up with their lids folded down/put on. I think these are my favorite pieces of the whole insert just because of how awesomely they work.

These are the holders for the expansion content: cards, cardboard, and little bits. The left one has a sweet little secret compartment to hold the little marker bits.

They also have legs to stand up! Here you can see them doing just that as well as how the left one looks with the secret compartment door in place.

This is what the bits and such look like with just the baggies they give you in the box to work with. The little plastic tubs in the bottom left are containers I added to hold the resource cubes/water bits. This is the “before” picture to compare with what you’ll see below with the insert pieces all assembled in the box. 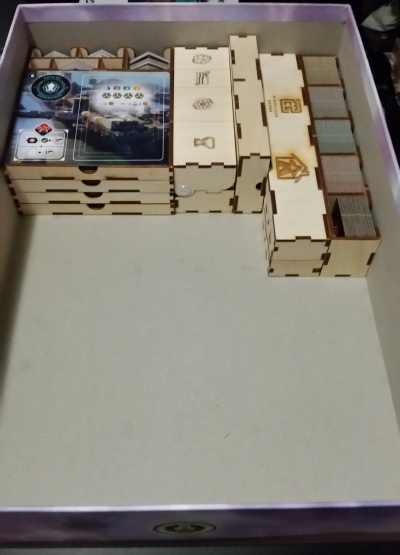 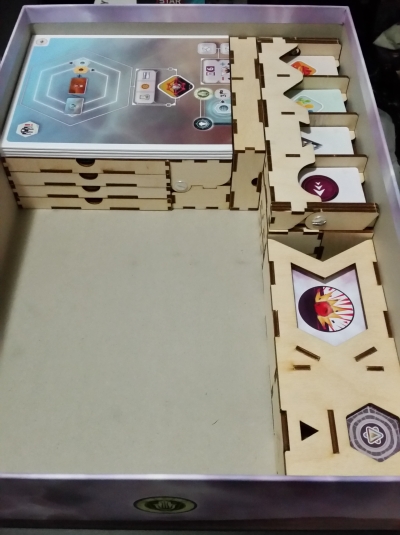 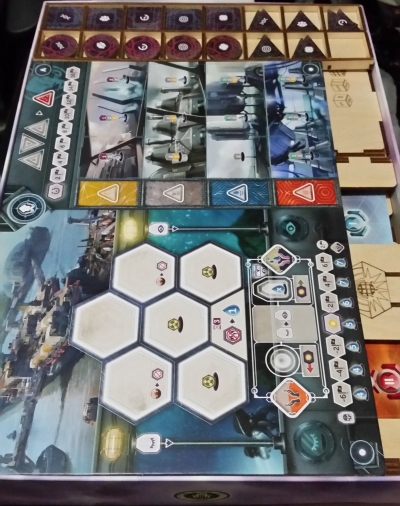 And the final addition is the player boards! They sit below the breakthrough tray on top of everything else.

SO MANY PIECES AND PARTS. But they all fit together so perfectly in the box. It’s really clever and cool how it all works out, how everything ends up stacking and sliding next to each other to fit evenly in the box. I really am amazed with whoever designed this, all the parts work together so well.

This insert is pricey, almost as much as the game itself, but once you get it together it’s gonna be well worth it. Everything is well organized and designed with not only storage but also gameplay in mind (as seen in all the card holders with the rotate-away legs for standing them up when playing). If you have and like playing Anachrony, and haven’t figured out a do-it-yourself insert or storage scheme for it, then I would highly recommend picking this up (get the hobby hammer, too, if you don’t have one already, it makes things SO MUCH easier). This is a brilliant insert!