Welcome to another unboxing. This time for Gamelyn Games and Scott Almes‘ Tiny Epic Galaxies: Beyond the Black, deluxe edition! I’ll be going over just the base game content first to give you an idea of what you get and whether it’s worth upgrading to deluxe for you. 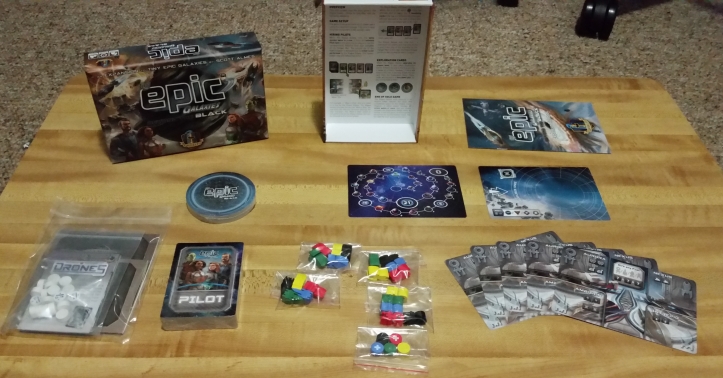 This is the box and everything in it! The packet on the bottom left is the deluxe content, I won’t discuss that until later. Everything else comes with ever copy of BTB. I’ll go into specifics for each part below!

Inside of the box top and bottom as well as the rulebook. The dice bay/lid features the cool art for the 4 new ships. The bottom gives solo variant rules for the new content.

The new score mat provided in the expansion. Not necessarily needed but can help you keep track of where your opponents are at during a game. The other side has the track without the planets on the numbers. Below that is the new Exploration Mat which holds the exploration cards.

Front side of the hangar cards/mats. One for each player. They hold your upgraded ships and the pilots you recruit. They also give reminders about the dice needed to hire pilots. 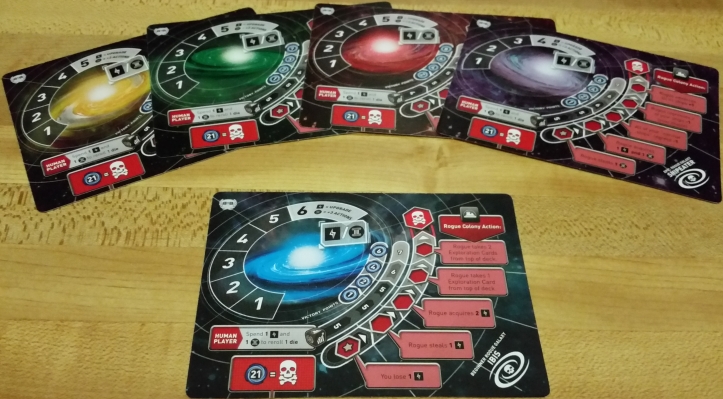 Back side of the hangar cards/mats. These are 5 more rogue galaxies for the solo play mode of TEG, one of each difficulty. I’m super excited for these as expansions don’t always provide increased replayability for solo modes so blatantly and awesomely! I really appreciate Gamelyn/Scott for adding these in.

All the new cards from the expansion! There are new secret missions and planets that take the new mechanics into account, and some of the new planets provide either energy OR culture! I’ll touch on the pilots and exploration cards below.

The pilots! Each one has a set of ships he/she can pilot (making them easier to hire for those ships) and a special ability active for the ship they are piloting (not others). The cards feel great just like the others in the expansion and the base game and there’s a nice variety to the characters.

The exploration cards! These new cards are a mix of good and bad (though more good I think) and have special abilities as well as icons (that affect end-game scoring), and sometimes tracks. If a bad card gets you stuck on the track you have to finish that before you can use the ship again.

Wood bits! Sorry for the fuzzy pic, my phone camera isn’t great. These are the upgraded ships, 4 types in each of the 5 player colors. Also the score markers for the new score mat. They are blank on one side and have a + (for once you go past 30) on the other.

The deluxe edition comes with the extra content shown above. I’ll go into detail about each of the 3 sets of things below (there are some promo-type cards in the Drones baggie with those bits).

This is the drones mini-expansion. It adds a simple rule to the game that you can add to your pilots. Basically, the drones can be activated by certain dice combos once per pilot to double their exploration icons at the end of the game (which, as mentioned above, matters during final scoring).

These are the 6 “promo” pilots, including the usual Gamelyn warrior himself, that are included in the deluxe edition.

This is the usual sleeve that comes with deluxe editions allowing you to store the base game and expansion boxes together and connected. It slides easily over the stack of games as you can see below.

My sleeve was folded weirdly in the box so it has a gnarly crease on the front which is a bit disappointing. I hope they aren’t all packed like that (the one for Tiny Epic Kingdoms in Hero’s Call wasn’t) but it still does what it’s supposed to.

The playmat is an option item you can get that doesn’t affect gameplay but is stylish and has positions for important information/cards. This includes helpful reminders about how many cards to deal out for the number of players in the game (you might be able to see the 2+, 3+, and 4+ markers on the pilot card spaces above) as well as spaces for the mats/large format cards such as the Exploration Mat. It also has a score chart along the top edge if you don’t want to use the score card/mat from BTB.

Here are the playmats set together, for original TEG and BTB. They are the same material and quality. The original one, imo, has a lot of unnecessary empty areas and the 2 mats together take up a lot of space (they’re bigger than my tiny table).

To remedy the space issue, I found that you can stack the mats in several ways so that they take up less space. The configuration above seemed the best one to me with the only things covered up being the achievements and dice activation bay. The former aren’t an absolute necessity for gameplay and the latter can be easily remedied by using the Activation Bay card/mat from TEG itself, nestled in the corner (or passed around with the dice as each player takes their turn). Each mat has a space for its mini-expansion content and both are readily accessible with this setup.

Overall I’m SUPER excited to get this to the table. The new mechanics especially make the solo game look even better than before!